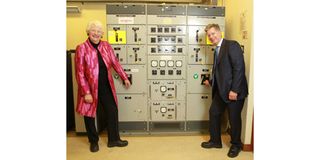 BELFAST– Analog television transmissions within the United Kingdom are now a thing of the past with the powering down of the last analog transmitter located in Northern Ireland. The digital television conversion project cost £630 million (more than $1 billion U.S.) and began in 1998. Dame Mary Peters, a 1972 Olympic gold medalist from Ireland was invited to switch off the transmitter as part of a ceremony marking the official end of the U.K. analog TV service that had its beginnings in 1936.

The switchover took place early Wednesday at the Divis transmitter plant located near Belfast. The new digital signal now originating from that site was expected to provide service to some 10 million viewers who had previously been unable to obtain satisfactory off-air DTV reception.

The digital conversion project was orchestrated by the U.K.’s Office of Communication, or Ofcom, a government-approved regulatory organization that has oversight in the areas of broadcasting, telecommunications and postal services.

“The UK’s switchover to digital has been a huge success,” said Ed Richards, Ofcom’s chief executive. “Not only has it created more TV choice for consumers, it has also freed up vital capacity that will be used to deliver mobile broadband services to 98 percent of cities, towns and villages across the U.K.”

A spectrum auctioning project know as “Digital Dividend” will begin later this year to allow telcom’s to compete for the reclaimed television broadcast frequencies.

The digital transition project involved the re-engineering of more than 1,100 transmitter facilities, and just as in the United States, a DTV “converter” assistance program was initiated to help off-air television viewers make the change. However, that program was not as far reaching, providing assistance only to the elderly and disabled.

The United Kingdom was the first nation to establish a regular television broadcast service. This began on Nov. 2, 1936, with programming and transmissions originating from London’s Alexandra Palace. The BBC 405-line broadcasts were also billed as the world’s first high-definition television service, as most contemporary experimental systems were then operating in the 300-line and below range. This initial television service was terminated in the fall of 1939 after the entry of Britain into WWII, ostensibly to prevent transmissions from being used for as a homing beacon by German bombers. The television service re-emerged in 1946.