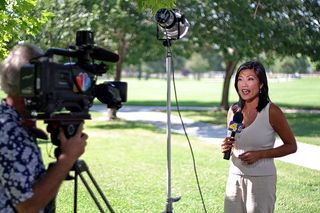 WASHINGTON: Local TV stations are the preferred source of news for the folks who responded to a survey released today by the Pew Research Center. Of the 2,259 adults queried, 78 percent said they get news from a local TV station. Very few people stuck with just one platform, however.

PLATFORM USAGE
Of those queried, 92 percent said they got news from several sources, including national TV, local TV, the Internet, local newspapers, radio, and national newspapers. Forty-six percent of those surveyed said they get news from four to six media platforms on a typical day. Just 7 percent check a single news platform on a typical day.

Six in 10 said they used the ’Net in combination with other platforms. After local TV stations, national networks--broadcast and cable--were the preferred source of news, cited by 73 percent of those surveyed. Folks next went to the ’Net for news--61 percent said they “get some kind of news online,” the Pew researchers said.

Radio was the fourth most popular source of news, with 54 percent; then local newspapers with 50 percent; and national newspapers like The New York Times and USA Today rounded out the top six sources with 17 percent of people citing them.

ONLINE BEHAVIORS
Pew researchers called the way people obtain news “foraging and opportunism.” E.g., “they seem to access news when the spirit moves them or they have a chance to check up on headlines.”

Similar to the way people typically use a limited number of TV channels, preference of online news sites wasn’t random. Most folks--57 percent--said they used between two and five sites most often; 11 percent said they checked more than five. Just 21 percent said they relied on a single Web site for news, while 65 percent said they didn’t have a favorite site.

The most popular online news subjects are the weather, followed by 81 percent of Internet news users; national events with 73 percent; health and medicine, 66 percent; business and the economy, 64 percent; international events, 62 percent; and science and technology, 60 percent.

The survey also revealed a demand for more news in some areas. Science news and discoveries topped the chart, with 44 percent of folks saying they’d like more info in those areas. Forty-one percent said they wanted more news on religion and spirituality; 39 percent, on health and medicine; 39 percent on state government, and 38 percent wanted more news about their neighborhoods and their local communities.

NEW METRICS
Other “new metrics” stood out in the survey, the Pew folks said. Portability, for example. One-third of those surveyed access news on cell phones. Personalization is another characteristic of news in the digital age. Twenty-eight percent of folks said they had customized news sources.

Contribution yielded another striking figure; 37 percent of Internet users in the survey said they had “contributed to the creation of news, commented about it, or disseminated it via postings on social media sites like Facebook or Twitter.”

In fact, 80 percent of respondents said they’d shared news stories online, feeding into 72 percent who said they followed news for the enjoyment of talking to others about it, and the 69 percent who considered it a civic obligation.

“People use their social networks and social networking technology to filter, assess, and react to news,” the survey results stated.

RATES OF CONSUMPTION
In terms of how much news people use, more than half of those surveyed said they followed the news “all or most of the time.” Another 25 percent followed it at least “some of the time.” Asked specifically about their news habits on “a typical day,” 99 percent said they got news from at least one of the top six sources mentioned earlier--local and national TV, local and national newspapers, Internet and radio.

Pew ask asked people if news topics were easier or harder to follow today compared to five years ago. Fifty-five percent said it was easier; 18 percent, more difficult. One-fourth said there was no difference. At the same time, 70 percent agreed with the statement that: “The amount of news and information available from different sources today is overwhelming.”

QUALITY OF COVERAGE
The verdict on quality of news was mixed. Sixty-three percent agreed that the major news organizations did a good job, yet 72 percent said most sources are “biased in their coverage.” Pew said the assessment was split down party lines.

“Liberals and Democrats are more likely to say the big news organizations do a good job on subjects that matter to them, while conservatives and Republicans are the ones most likely to see coverage as biased,” the nonprofit said.

“Those who are well-educated, relatively well-off financially, and older are more likely than others to say they follow the news all or most of the time,” the results stated.”

(Image of a KNBC-TV remote news team by Shavar Ross)

December 9. 2009: “Medium Shift: Radio to Television”
The growth of Internet radio has sparked a desire to stream not only audio from radio stations, but video content as well. More and more stations are installing television production equipment into their studios to broadcast their morning shows not just to car or Internet radios, but to flat-screen computer monitors in cubicles and offices all over the country.

May 20, 2009: “TV Rules Among Three Screens”
Television remains the screen of choice among Americans, Nielsen said. During the first quarter, the 285 million Americans who watched TV did so for an average of 153 hours a month, up 1.2 percent from last year.