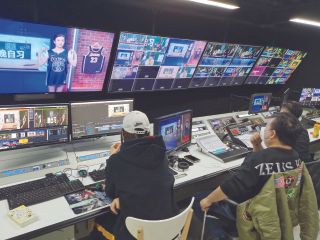 The HyperDeck Extreme 8K HDR in use with zhibo.tv, a Beijing-based company that specializes in streaming sports programs. (Image credit: Blackmagic)

This story comes from the NAB Show Daily Special Edition

The realization of an 8K ecosystem, from acquisition to display, is still off in the distance, pushed a bit further that way with the delay of the 2020 Olympic Games, which was to mark the launch of NHK’s entry into broadcasting imagery at that resolution.

Regardless, some specialty content is already being shot, posted and displayed at 8K and many facets of the industry—acquisition, post, delivery—have been gearing up for the eventuality of an ecosystem involving digital imagery containing four times the image data per frame as is found in the 4K equivalent.

Blackmagic Design has been introducing 8K capabilities into products lines since 2017 and will likely introduce more products this year. The company has also brought out tools for use in live production in anticipation of the next Olympic Games and NHK’s commitment to 8K broadcast.

“We’ve accepted the growth of the file sizes and developed products in anticipation of that need,” said Bob Caniglia, Blackmagic Design’s director of sales operations for North America, who points out that they offer existing products that can record and playback 8K and switch live with a 10-input 8K switcher, as well as monitoring devices to convert quad 12-gig SDI to quad HDMI to feed 8K HDMI displays.

Pointing to the company’s 8K Decklink video cards for 8K-out, he said “We’ve introduced 4K capability over previous generations to accommodate both 4K and HD [workflows] so there was a growth path from HD to 4K. Now we’re doing the same for 4K and 8K,” he explained.

Blackmagic, he said, has worked to accommodate “the significant growth of file sizes in our development process because we anticipate an increasing need for 8K products.”

Red Digital Cinema has enabled true 8K image capture since the release of their Red Weapon 8K sensor in 2015. “We did something similar with 4K in 2007,” said Dan Duran, Red’s post production/workflow specialist. “Some people asked why. ‘Everyone is mastering in 1080 or 2K. There are no 4K TVs.’ Well, I don’t think you can even buy a 1080 TV today and you can go to a store and buy an 8K TV right now so it’s a similar concept.”

4K obviously has taken off as a home display format but, Duran added, many productions made use of the advantages of shooting in 4K even for content that was posted and delivered in 1080.

“It is always part of the equation of what people want from resolution, dynamic range and noise floor,” which translates even to down-sampled imagery. So when it comes down to it, he said, “people aren’t viewing 8K right now at home or in a theatre, but we still see productions using our 8K cameras and then mastering in 4K or 2K. By super sampling, you have smaller pixels, cleaner image, more detail.”

This is perhaps even truer in VFX plate photography, where imagery can undergo the most post processing.

“Visual effects artists want to start with the highest quality possible,” he explained. “It’s a lot easier to add [noise] than remove it. They aren’t finishing in 8K at this point, but you have the improved noise floor and greater detail and you can blow the [images] up or shrink them down with better results than if you shot at 4K or 2K.”

READY TO SCALE UP

Chief Color Scientist John Quartel of Company 3, a post-production company with multiple facilities that offer DI (Digital Intermediate) finishing, VFX and other services for feature film, episodic TV, commercials and music videos, explained that while there is little demand currently for 8K delivery, the company is ready to quickly scale up when that does happen.

The creation of true 8K content, from shoot to display, is currently the domain of specialty production for large- venue sports, concerts and billboards, but wider use in the entertainment industry is very likely imminent. For anybody involved in content creation, it’s important to see how major stakeholders in an 8K future are preparing.

“The tools to ingest, process, edit, color, composite and the rest are in place right now,” he said. “The only issues involve the upgrade in storage and bandwidth, and those become less constraining as the technology improves.

“There is nothing fundamentally difficult about working with 8K for DI work,” Quartel said. “Visual effects can be more resolution-restrictive due to factors of render times and storage costs, which is why many studios are still requesting 2K VFX even for features finishing at 4K.”

Fundamentally, he added, the infrastructure for 8K finishing is essentially ready and the only issues would be those that always accompany scaling up to accommodate an increase in the amount of data that would need to be moved and stored among their locations.