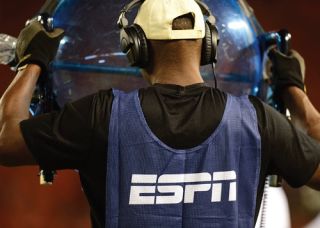 BRISTOL, CONN.—ESPN is currently in the process of upgrading all of its live sports broadcasts from stereo to 5.1 surround sound. This means that every one of the next year’s 2,700 ESPN remote sports broadcasts will be captured in true 5.1 audio, and then passed through in 5.1 directly to viewers via cable or satellite TV.

A sound technician for ESPN captures audio during a regular 2012 season game between the Virginia Tech Hokies and the Georgia Tech Yellow Jackets. In previous years, the sports network’s 5.1 feeds were combined into an encoded stream at the remote site before transmission. They were then decoded at the receiving production center before being passed onto carriers and ultimately consumers. For the record, ESPN has been working with 5.1 surround sound since the turn of the century

“Moving to discrete 5.1 for all of our events is truly daunting,” said Kevin Cleary, ESPN’s senior audio producer. “But the payoff is in giving our viewers much more pristine 5.1 in their living rooms. And make no mistake: There are a lot of people watching with 5.1 surround sound equipment.”

A NECESSARY ADVANCE
For ESPN, broadcasting live sports in 5.1 is as important as shooting it in high definition. “With its 5.1 channels of audio, surround sound adds 3D depth to the flat 2D world offered by stereo,” Cleary explained. “That’s why offering 5.1 is so necessary today. It puts the viewer right in the action.”

Cleary characterizes the superiority of 5.1 to stereo as being akin to “the difference between 3DTV and analog TV.” That’s a view shared by Fred Aldous, senior mixer and audio consultant for Fox Sports.

Watching in 5.1 is one thing; mixing in a 5.1 audio control room—with speakers front, center and back—is quite another. “When you add a producer telling you something on one speaker; another on a second speaker, and an associate producer on a third, mixing in 5.1 live can be quite overwhelming,” Aldous said. “But the overall result is worth the effort. It’s that good.”

5.1 MIX: WHAT’S CHANGED
The basic 5.1 mix hasn’t changed much since the early days; the main feed is captured by a main 5.1 microphone— equipped with separate microphone pickups for each channel—that serves as the stand-in for the viewer.

“The goal is to place the main 5.1 microphone as if it were a fan sitting in the ideal location to hear the game, the crowd noise, and everything else from all around him,” said David Missall, a National Market Development Manager for Sennheiser Electronic Corporation. “We then use single channel parabolic mics—known as ‘big ears’—to pick up the grunts and collisions on the field.”

What has changed, as far as the main 5.1 microphone is concerned, is how the pickups are spaced and configured. “You can tweak the system to improve the separation and depth,” Missall said. “There’s lots of room for manipulation, to get the sound you want.”

A second change: “There is now general agreement that, whatever else you do with the audio, the dialogue must always be on the center channel,” said Ken Hunold, broadcast engineer at Dolby Laboratories. “This keeps the viewer’s orientation to the game consistent and clear.”

WHAT’S BEEN LEARNED
Having worked in 5.1 for over a decade, ESPN knows this technology quite well. Over that time, the network has learned how to harness 5.1’s depth to tell an audio story to the viewer that is just as compelling as the video they’re seeing onscreen.

“The goal is to not only put the viewer into the game in 3D audio, but also to use the audio to add to the story,” said Cleary. “The crack of helmets hitting; the voices of the referees, even a stray crowd noise. Anything that conveys the feeling of the game helps tell the story; especially if it’s a fan yelling behind the viewer’s left ear, or a quarterback making calls in front of his right.”

5.1 wisdom has also been gained at Fox Sports. “What I have learned is a good surround gives the viewer that first hand experience,” said Aldous. “We have also learned that our 5.1 mix has to be a compromise. It must sound good in stereo as well as 5.1—because most of our viewing audience is still hearing us in stereo.”

As for lessons learned on site? “On the shows that I mix—NFL and NASCAR for Fox—I like to use multiple point stereo and mono microphones for my crowd,” Aldous advised. “By placing the mics around the venue, I get a ‘bigger’, more varied sound for my 5.1 mix.”

There is no doubt that 5.1 is becoming the de facto broadcast standard. “It’s not just for sports,” noted Dolby Labs’ Ken Hunold. “5.1 is turning up in prime-time and special events network programming.”

Cleary and Aldous are big believers in the overall power of 5.1 surround sound. “5.1’s 3D depth really puts you in the event, in a way that stereo just can’t,” Aldous said. “5.1 is an absolute necessity in today’s HD world,” Cleary added. “Nothing less will do.”