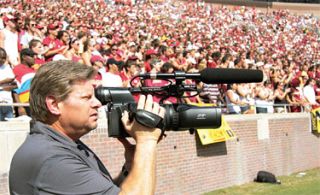 NEW YORK
At the 2010 NAB Show, Panasonic formally announced their entry into small form-factor 3D acquisition with the AG-3DA1. Priced at $21,000 and available only via custom order, the AG-3DA1 records in AVCCAM (Panasonic's nomenclature for the AVCHD codec) to dual SDHC or SDXC cards representing right eye/left eye views. Acquisition is via a dual lens arrangement with dual 3-MOS full 1920x1080 sensors. Within the camera menu system are stereoscopic convergence and alignment controls for ease of set up without specific need for a stereographer on set.

The camera is now shipping and is finding a wide niche from rental houses to independent production to educational/industrial usages. Jan Crittenden Livingston, Product Line Manager Panasonic Business Solutions, notes that this camera is targeted to any 3D production environment. On a large-scale production, this small camera can be utilized where large rigs are impractical. For smaller producers, the 3DA1 is an entry point to stereoscopic production making production "at least easier, but not necessarily easy."

Abel Cine has invested in the 3DA1 for its rental fleet, targeting a market that Abel calls "Independent 3D." This sales and rental house observes that independents constitute a far greater percentage of the market than major feature or broadcast producers. The availability of consumer 3D televisions as well as 3D support from streaming providers (most notably here, YouTube) permits independents to add significant production value to the varieties of work in which they already were engaged.

Mark Rodin, executive director of Seminole Productions at Florida State University, checks out the Panasonic AGA3DA1. Florida State University has just purchased a unit for Seminole Productions, the university's video production division, to serve both as a recruitment medium as well as for team analysis. The simplicity of a small camera solution without the need and accompanying expense of a large dual rig with extra personnel combined with easy acquisition and editing, allows the coaches rapid access to 3D views of player and team performance. Seminole expects that other university athletic teams will ultimately utilize 3D for coaching review.

Workflows and monitoring are continuing to evolve and advance thought to the workflow is essential before beginning production with the camera. Cineform offers a $3,000 software solution requiring an AJA Kona 3 card with its dual SDI outputs to a monitor such as the Panasonic BT-3DL2550.

Seminole Productions, in fact, utilizes the 3DL2550 monitor and it is high on Abel's recommended list as well. Unlike consumer 3D televisions based around active shutter glasses, the Panasonic monitor utilizes polarized glasses. This facilitates viewing particularly in environments where multiple monitors might be in use with the issues of syncing the IR signals from the TV to the active shutter glasses. And of course, this cost of polarized glasses is a fraction of that of active shutter optics.

The Cineform total solution consists of its FirstLight acquisition and color correction module and then specific plug-ins for Final Cut Pro, Adobe PremierePro, or Avid Media Composer. The Cineform solution is cross-platform, Windows or Mac OS 10.5 or greater.

Other 3D post solutions come from Tim Dashwood, which offers two products that work through Noise Industries' FxFactory for Mac Platforms including FCP, Motion and AE. Stereo 3D ToolBox 2.0 LE is a $99 entry level solution for those just beginning to work in 3D but is still fully-featured enough to support side-by-side, right eye/left-eye, anaglyph, interlaced or superimposed 3D with convergence adjustments as well as even direct output to YouTube 3D. The $1,500 Stereo 3D ToolBox provides much more precise alignment and preview tools along with a Stereo 3D text generator. Monitoring solutions and requirements would remain much the same as Cineform however it would be possible to monitor through any device which supports dual-link SDI or HDMI 1.4.

Convergent Design Nano3D The production flexibility of the 3DA1 is enhanced by third party acquisition devices which can record the camera's dual SDI or dual HDMI outputs to a more robust codec than the native AVCCAM. Convergent Design offers the Nano 3D, a $7,295 dual version of its popular NanoFlash CF recording/playback solution. The NanoFlash records to Sony's MPEG-2 HD (XDCAM) codecs in either long GOP or I-frame formats at up to 280 Mbps data rates. The two units record right eye/left eye in sync.

Cinedeck Extreme priced from $9,995 captures in a wide range of codecs including Apple ProRes, Avid DNxHD, and CineForm to dual SDI or HDMI 1.4 inputs. The Cinedeck unit also doubles as a high resolution on-camera monitor.

Both of these acquisition solutions enable the 3DA1 to be used in far more demanding production applications than would be possible with the limitations of the native AVCCAM codec.

With increasing numbers of 3DA1 cameras entering the pipeline, Panasonic has broken new ground in making high quality stereoscopic production available to a significant segment of the marketplace.