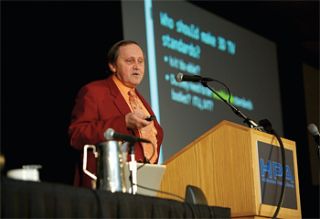 RANCHO MIRAGE, CALIF.
From the tee shirt that mocked “It’s a fad” in red/cyan letters to the presentation, “3DTV: Are You Guys Nuts?” one topic permeated the 16th annual Hollywood Post Alliance Tech Retreat here in February. Yet the 453 attendees also had a chance to ponder a range of other pressing video issues ranging from Mobile DTV to program loudness to the broadcast spectrum grab and also enjoy a rollicking roast of longtime Tech Retreat host Mark Schubin.

The four-hour opening session on 3DTV underscored the significance of the fast-emerging technology. Presentations ranged from a nuanced exploration of how to produce closed captions and other superimposed graphics for the multi-layer 3D display, to an urgent call for neurological research 3D’s effect on viewers. In the process, contrary viewpoints emerged about the prospects for 3D features.

David Wood, Deputy Director General, European Broadcasting Union Technical Group. For example, several speakers addressed NG3D (“No Glasses 3D”), which Schubin characterized as an “object wave profile” or holography, which may be 15 to 20 years away “optimistically.”

“Autostereoscopic 3D won’t be ready for 20 years,” insisted Ethan Schur, chief marketing officer at TD Vision Systems Inc. and a leader of the 3D@Home Coalition, a consortium of content makers, distribution providers and consumer electronics manufacturers. He acknowledged that there are “many challenges and opportunities,” especially ”for 3DTV for mobile devices.” Schur pointed out that there are already several proposals for mobile autostereo devices, which he said could be “viable,” and he urged the extension of the ATSC mobile DTV standard to include 3D.

“It’s a daunting task,” he said, citing the need to place such titling “where it doesn’t interfere with the underlying video.

“Part of the problem is an artistic decision,” he continued. “Do you want them to come out or set back or [appear] near the character who is speaking?”

“This depth adjustment has to be done on a frame-by-frame basis,” Basse added, noting that his company’s set-top boxes do not currently have the capability to handle such 3D displays.

Further underscoring the challenges of 3D deployment was David Wood, deputy director general of the European Broadcasting Union Technical Group. Under the title, “Are You Guys Nuts?” Wood drilled into a roster of technical and policy issues that generated both guffaws and concerns from the HPA audience.

Starting with a perception that 3D could “turn from a ‘wow’ to a ’ho-hum,’” Wood challenged TV engineers to figure out how 3D might change human behavior. He cited fundamental issues such as whether 3D would encourage longer or shorter viewing sessions, generate more or less retention and engagement and even have a “calming or stressing” impact on viewers.

“These are important for people in the broadcast business to know,” Wood said, citing a French study about high definition that found greater retention and engagement for HD viewing than for conventional TV.

Wood also posed a fundamental question: “Who should make 3D standards?” which he called “one of the key problems facing the global industry.”

“Or should we let the market decide? Do we really need all these systems?” Wood pondered. “This situation is quite complicated,” because of the need to “determine the relationships to Blu-ray and games.”

Further assuming his contrarian stance, Wood added a caution to content and equipment providers about the “long-term impact of viewing 3D shows.” He cited anecdotal evidence about some viewers getting headaches and dizziness from watching 3D shows.

Urging an immediate study about the behavioral factors of 3D viewing, Wood insisted, “We owe it to the public to research the psycho-social effects” of 3D technology.

Panasonic CTO Eisuke Tsuyazaki said that Panasonic will work with the Entertainment Technology Center at the University of Southern California (ETC@USC) to develop studies about the bio-physiology of 3D systems.

“We need to understand the biophysics and physiology of watching things in 3D,” Tsuyazaki said, citing issues such as eye strain, the effect of camera motion and the differences between adult and child viewing.

Phil Eisler, general manager of 3D Vision at chip-maker NVIDIA, cited the growing use of 3D on personal computers, stressing the opportunities in videogames, noting there has been “no negative feedback” from gamers who have used 3D stereo games.

Jerry Whitaker, vice president-standards development at ATSC, summarized the latest developments to establish the A/153 mobile DTV standard, which will enable a “Rich Media Environment” (RME) for clipcasting and other new services.

“The concept is to allow broadcasters to extend the MDTV system so they can use it to the full bandwidth,” he explained, basing it on the legacy A/53 standard.

In its sweeping examination of TV technology and competitive issues, the HPA Tech Retreat agenda offered glimpses of immediate and long-term factors affecting the industry. At one of the liveliest sessions, the “Broadcasters Panel,” network and local TV executives examined an array of issues facing them.

Bob Allen, executive vice president and general manager of KESQ-TV, a multicaster in Palm Springs, noted that, “this is the first HPA after the DTV transition” and that his stations still gets consumer calls about technical problems.

“We thought that we had a small penetration of over-the-air viewers,” he said, “but it turns out that we find more people are watching OTA, and I suspect it’s because of the quality.”

Allen turned up the heat when the topic of the “spectrum grab” for non-broadcast services popped up. “From this day forward, we will be fighting for our spectrum for the rest of our careers,” he said.

Art Allison, senior director of Advanced Engineering Science and Technology at NAB, offered what was hailed as a masterpiece of understatement: “The message will get to Congress that if they do something ill-advised, the people will not stand for it.”

James Burger, media attorney with the Washington, D.C. law firm, Dow Lohnes, offered a checklist of critical issues affecting broadcasters, including the spectrum grab, the Commercial Advertisement Loudness Mitigation (CALM) Act and white spaces. The latter topic is not dead, he said, but has been blended into the spectrum reallocation debate. Echoing the view of KESQ’s Allen and NAB’s Allison, Burger said, “We need more spectrum, but I’d be appalled if government did something to take away broadcast service.”