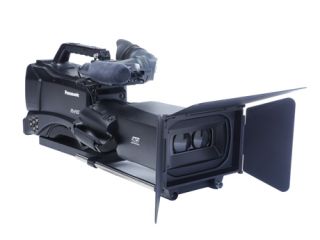 LAS VEGAS: Panasonic is keeping the emphasis on 3D, AVC-Intra and P2. Debutantes at this year’s NAB Show include:

The AG-3DP1 3D HD Shoulder-Mount Camcorder, left, with two, 1/3-inch imagers supporting 1920x1080 resolution and AVC-Intra recording will be on hand. It sports dual 17x lenses and a 3.2-inch LCD that switches from left to right to overlay. The 3DP1 is able to record up to 80 minutes each on dual 64 GB P2 cards in AVC-Intra 100 1080/24pN. It will be available in the fall. Suggested retail price was not disclosed.

AVCCAM Importer software is a QuickTime plug-in that eliminates the need to convert AVCHD files to ProRES422 files before editing in Final Cut Pro. It will be available this summer as a free download.

The AG- HPD24 P2 portable deck features 3D synchronized record/playback with a second deck; native 24p recording with variable frame rates; a USB 3.0 interface; and 24-bit, four-channel audio recording in AVC-Intra 100/50. It allows for playback and review of P2 card content on a 3.5-inch, 16:9 LCD screen. The HPD24 has two P2 card slots, is ½ RU in size and weighs 5.5 pounds. It will be available this summer for $5,560.

A new wireless system for Panasonic’s AJ-HPX3100 1080p P2 camcorder comprises the AJ-WM30 wireless module and the AJ-SFU3100 software key. Both promote seamless transfer of critical camera information between the HPX3100 and “a vast population of intelligent devices including PCs, iPads and iPhones,” Panasonic says. The module is available for $150, the key, for $1,500.

The BT-LH910 at rightis a new 9-inch LCD monitor for field and studio use, with high brightness and contrast, 1280x768 WXGA resolution, and new 3D assist functions. The BT-LH910 has a 2x SDI IN overlay and side-by-side display that provides a 2D view of 3D checks. It’s available now for a suggested list price of $3,500.

AJ-SF110 Video Ingest and AJ-SF100 Linear Tape-Open (LTO) Archive software accommodate FireWire or SDI, and convert files to P2 formats during ingest. SF100 Video Ingest is priced at $2,500; SF100 LTO is priced at $5,000. Both will be available in May.

The AJ-PCD30 P2 drive is a new three-slot P2 device with a USB 3.0 interface for offloading AVC-Intra 100 footage at more than 15X real-time. The PCD30 can transfer data from up to three P2 cards simultaneously. It can be used externally or installed in the 5-inch bay of a PC, and is Mac and Windows compatible. The drive will be available this summer for $2,225.

AVCUltra was teased as the next generation of Panasonic’s version of H.264. It’s said to be able to record 4K images at 4:4:4, and support “visually lossless” versions of 720p, 1080i and 1080p/24 and 1080p/60. AVC Ultra has been floating around for a couple of years no, but no specific release date has been announced.