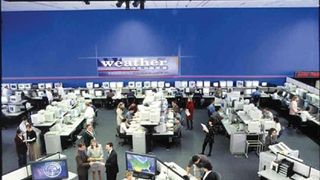 The history of weather in broadcasting dates back to 1912, when Charles Herrold, inventor of a mechanical radio called the Arc Fone, began broadcasting for the people of San Jose, CA. This service continued until the outbreak of World War I, when the government forced all experimental radio off the air.

With the resumption of broadcasting after WWI, weather information became an integral part of radio. That legacy has carried on into television today. A multi-million dollar industry has developed, offering devices and services to help broadcasters bring current weather information to their viewers.

There are three key technologies involved in the display and presentation of weather on television: radar, satellites and computers. The application of these elements in each market varies depending on local conditions and budget considerations.

Like WISC-TV in Madison, WI, many stations have “weather centers” from which they keep their viewers updated. Often times the weather graphics equipment is on display as part of the set. Photo courtesy Meteorlogix Inc.

The first line of weather data comes from “weather sticks.” Some of these small weather monitoring stations can measure over 35 different parameters. They are located through the country and can be found along roadsides as small posts. Weather sticks can be had for just under $600 and go up in price from there, depending on available features.

Some broadcasters buy these units and become part of the automated surface observation systems (ASOS) that are sprinkled nearly everywhere, including most airports. The information from this extensive network is collected by the National Weather Service and used to create a report that forecasters use to determine weather patterns. Some of these stations also offer a video output option.

In addition to doing weather from the studio, some stations also do live shots from the field using ENG equipment. Real-time weather readings from the field lend credibility to not only the weather, but the entire news operation. A portable weather station can be useful for these kinds of shots. Hurricane storm trackers have used these kinds of mobile weather monitoring instrumentation packages to broadcast readings from the eye of a hurricane to the National Hurricane Center in Miami, FL, while letting local viewers know of current conditions. This equipment can also be used to keep a station's Web site updated with the latest local weather conditions.

Stations can also go to the National Weather Service for raw data, radar and satellite pictures to incorporate in their weather coverage. This information, as well as that from weather satellites, was originally distributed on a need-to-know basis only. Now anyone with a computer can connect directly to the National Oceanographic Atmospheric Administration (www.noaa.gov) and access weather radar and satellite images from nearly anywhere. Although this raw data is used by most computerized weather systems, it is often supplemented by a station's own private radar system when weather conditions change rapidly.

Stations located in areas where weather events are volatile should consider having their own weather radar system. The installation of a station-owned radar system requires a great deal of on-site preparation. All radar systems must be type accepted by the FCC, and each station must apply for and receive an FCC license. The task then becomes getting the signal back to the studio from what is usually a remote location that overlooks the coverage area. Radar systems are also available that measure the Doppler Effect, the compression and expansion of wave fronts as they move toward or away from a given point.

When considering technical options, there are a number of questions that need to be answered. Systems have come a long way since the days when the weather person had to write backwards from the rear side of a Plexiglas map or magnetic clouds and lightning bolts graced a map mounted on a metal wall. Most computer-based weather graphics services today offer a core of similar products. The distinctions come in the extras each has to offer. How fancy does your station want to get?

As you make your decision, consider the data source for the system, and how often it is updated. Another consideration is the level of customer service provided by the manufacturer. Don't be afraid to call stations already using the system you are considering to gain information to aid in your decision.

Be sure to choose a system that will render images that can be put directly on the air or your Web site without requiring you to doctor them first. Also keep in mind that the weather talent may not have a high level of experience with the equipment, and will need a system that is user-friendly.

Once you have chosen a system, you still need a graphics source. Most of the raw data, radar and satellite picture information used will come from the National Weather Service via satellite to a dish on the station's roof.

Graphics programs are available that enable stations to present weather in creative ways. Weather Central’s WalkOnWeather, for instance, uses a real-time composite of camera, key and computer animations to place the weather talent in the scene.

Few stations try to do weather without a chroma key wall. Some considerations in the use of a chroma key wall are proper lighting and the color of the clothing worn by the talent. It is also important to place monitors strategically around the key wall set so the talent won't look like they're watching some other show.

An additional factor to consider is redundancy. This is an important and often overlooked issue. If your community depends on your station for life-saving weather reports, don't let them down because one component or another failed.

If you don't have the technical staff or people you can rely on for competent pre-wiring, you may want to consider using a turnkey service for installation of the equipment. If the implementation of the weather system is to be a gradual one, then priorities have to be set so that you get the key ingredients up front and also add to the system later in an organized manner.

As new graphics technology is integrated into your facility, don't be surprised if your staff must make an effort to learn about the system. Engineers, especially in smaller markets, will be required to learn about the aesthetics of weather maps and graphics in order to tie all the available data to a specific forecast. Although a GM doesn't typically look to engineers for artistic considerations, don't forget that engineers did nearly everything in the early days of television. There might just be a bit of that legacy still in our bag of tricks.

So when the GM decides to improve your station's weather coverage, realize that engineers face new challenges with the advent of multicasting. Those extra channels will have to be filled with something, and weather might help pay the bills.