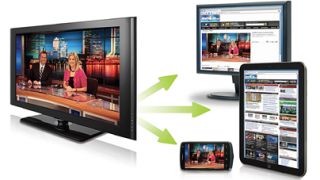 JOHNSTON, IOWA—Among the tasks on my to-do list at NAB this year was to take a look at production automation technology. I have to admit that I am pretty old school when it comes to thinking about production automation versus say, master control automation. Master control has long been about running a predefined sequence of events. Traffic and programming create the event list and master runs the list in order. If it is done right, it is a simple task to automate.

Now I admit that that is a big "if," but my experience has been that it ends up being relatively simple. Production, on the other hand, has always had a more creative and therefore unpredictable side that I think would be much more challenging to do right. However, I have an open mind so I wanted to see what was possible in the IPTV operating environment.

Grass Valley’s MediaFUSE automation product suite was among the concepts showcased at NAB that help broadcasters move beyond being just ‘content carriers.’ The production switcher is the heart of our production system and since we have a Grass Valley Kalypso, I figured GVG was the best place to start. As luck would have it, they had a press conference at the beginning of the show and since the company has just changed hands (again) and is restructuring (again), I figured I would sit in and hear the corporate strategy before I listened to the sales pitch on their version of production automation.

So I hid in the back of the room and listened to what they had to say. I have to admit I am very glad I did because in addition to all of the usual talk about how they would be overhauling their organization to deal with the rapidly changing industry, their CEO talked about how they see their customers' needs and changing attitudes.

I was especially interested when it was noted that a growing segment of their customers believe that their core business is content creation. I have been troubled that the vast majority of local stations have become merely "carriers of content" created by others. I know that my colleagues working at commercial stations will point to their newscasts as local and they are right, but as a percentage of the time they are radiating a unique RF signal to their markets, it is a very small percentage of the total and a considerable portion of the newscast is content that is being replayed or repurposed.

Think about it! Local television broadcasting started out as the only game in town and our chief competitors were newspapers and radio. Then came cable, initially building its infrastructure by taking the local station signals and delivering them to places where the signals were either terrain shielded or beyond the reliable coverage of the stations' transmitters. Then cable added additional services and market fragmentation started. Satellite came in and did the same thing and now broadband services and wireless carriers are following suit.

So now in addition to the fragmentation and niche programming channels, these services and others are available from numerous sources. A carrier of someone else's content is in a highly commoditized business and unless they are dealing in volume, the long range business outlook would appear to me to be pretty bleak. I would not consider 19.4 Mbps designed primarily to reach fixed receivers with antennas mounted 30 feet above the ground a high volume carrier.

The big national content creators already offer alternate distribution services via broadband. They are separating their core business—content creation—from the distribution mechanism. Their struggle right now is in maintaining control of their content so that it can be properly monetized, but ultimately it will all be available as a stream or on-demand directly to the consumer's home, whether via cable, satellite or broadband. If the only difference between the local station and the network or service it is affiliated with is a few local newscasts and some local commercials, then the future for many of those local stations is at best uncertain.

So what has all of this to do with production automation? For me it means think about the process strategically, not as a cost savings or efficiency effort. A long time ago I learned that a business cannot save its way to success. Cost cutting and increased efficiency can slow and even stop, albeit temporarily, the fall, but growth requires new products and services.

So as I looked at the GVG Ignite and MediaFUSE automation product suite, I saw concepts with some potential. I visited a number of other manufacturers with similar products and capabilities. But as I evaluate production automation for IPTV, it will be with an eye on how we can create more local content that is unique to our audience, not just reducing the cost of creating our existing content. And that will require a more strategic and station-wide analysis, not just adding some software to our production control room.

Bill Hayes is the director of engineering at Iowa Public Television. He can be reached via TV Technology.