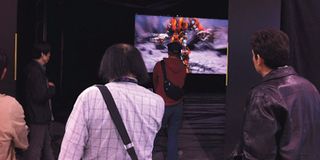 LAS VEGAS: NAB Show attendees, from those who buy to those who write about the show, often suffer from the "forest and trees" syndrome: they concentrate so hard on specific pieces of equipment or new technologies that they never get the "wide shot."

But Jim Church, head of technology and operations at KATV in Little Rock, Ark., and senior vice president for the station's owner, Allbritton Communications Co., rightly nailed it about this year's show.

"I kind of think we're getting back to the way things were in the old days, where things changed in minor steps," he said. "We're not doing an ATSC rollout, we're not doing a Nextel change-out on ENG, we're not rolling out a lot of new HD cameras. Now we're doing a lot of minor facility changes."

Each NAB is remembered for something, and this one could well be remembered as the "second screen" NAB. Panel discussions in meeting rooms and exhibitors on the floor kept noting that more and more of the viewing audience are watching TV while looking for additional information on their smartphones or laptops (interactive TV seems to have arrived, unannounced).

This has left broadcasters wondering how they can economically and ergonomically push their news content out as on-demand clips, social media conversations, polls and the rest. Exhibitors answered with solutions that automate the feeding of those second screens, without duplicating the efforts it took to cover those news stories in the beginning.

At the past couple of NABs, 3D was such a hot topic that signs reading "3D-Ready" or "Enhances 3D" or "A 3D Necessity" adorned many booths, (how can a tripod be "3D ready?") This year, while there were still some serious introductions of 3D products, interest in 3D has definitely back-slid.

"I saw some lessening of emphasis on 3D at the 2012 CES," said Randall Dark, CEO of Randall Dark Productions in Dallas. "I thought there was a predominant change away from focus on 3D at NAB. There was a lot of buzz about 4K [cameras], and less on 3D."

One of the highlights of the 2012 NAB Show was the first U.S. demonstration of a 200-inch, glasses-free 3D projection system, presented by the Japanese national research lab, National Institute for Information and Communication Technology in the International Research Park. Look for more coverage of this exhibit in the May 31 issue. That said, Dark doesn't see 4K cameras becoming ubiquitous in video production any time soon. "It's a 'Catch 22;' when is too much too much?" he asked. "There are certain projects where I require a high-end camera, like the feature film I just finished. And then I'm doing a documentary for distribution on television, and I don't need a 4K camera."

Nevertheless there were plenty of 4K cameras introduced at the show, along with 4K and beyond lenses. One application touted for a 4K camera in a broadcast television setting was in sports, where a 4K image shown in a replay situation could be digitally zoomed in to a quarter of the screen without losing resolution.

Is that a smartphone in your pocket, or a production tool? At NAB, there seemed to be no end to what exhibitors could do with a smartphone. They were used as viewfinders, wireless monitors, teleprompter displays, lighting and robotic camera control, you name it. And when smartphones were used as cameras, there were plenty of mounts, stabilizers, lenses and such to augment them.

To judge by some upgrade specials offered by a number of editing software vendors, it seems they think the latest version of a very popular editing program has left the door open to a raft of defections. By offering a low-cost transition for registered owners of the un-named edit package, they're hoping to acquire loyal customers who will reward them with upgrade feeds far into the future.

Camera support exhibitors normally outnumber lighting vendors by a reasonable margin. This year lighting companies, most of them selling LED fixtures, took a 20-percent lead in number of exhibitors over the camera support people. Nearly all classic lighting fixture designs were being shown with LED illumination, though the industry awaits truly high output LED lights to match that of some traditional fixtures. Several companies were showing plasma illuminated fixtures, which may be the next generation of lighting equipment.

In camera support, there seemed to be more attention paid to economical, small payload pan and tilt heads that perform similarly to existing large payload heads. Camera buyers traditionally will pay a certain fraction of their camera's cost for a tripod system, and realizing this, tripod system makers' newest products, in general, are considerably less expensive than their predecessors.

One category of equipment supplier was a must-see for broadcasters: loudness measurement, monitoring, processing and logging hardware and software products to provide compliance with the CALM (Commercial Advertisement Loudness Mitigation) Act, which goes into effect in December.

"Our company came looking for compliance equipment," said Mark Siegel, president of system integrator ABS in Seattle. In addition to addressing the CALM situation, Siegel said his customers also wanted to see what was in store to provide EAS (Emergency Alert System) compliance. "You want to be looking at a solution that is flexible enough to evolve as the EAS system itself, CAP (Common Alerting Protocol) and IPAWS (Integrated Public Alert and Warning System) evolves," he said.

On the Mobile DTV front, there was little new product on the exhibit floor, as most ATSC exciters now offer Mobile DTV capability as part of the standard offering or an option. However, there now appears to be a critical mass of broadcasters providing Mobile DTV service in their markets, though many of them are encrypted and un-receivable but currently available mobile DTV receive devices. Handsets capable of receiving such encrypted signals, from leading smartphone makers, were shown on the exhibit floor, and should roll out to consumers in the fall.

The spectrum squeeze's head-on collision with wireless microphone and wireless intercom operators has resulted in products from vendors of both devices that are moving out of the licensed frequency bands and into unlicensed spectrum.