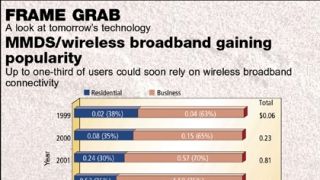 Conventional analog composite systems use video information compression methods by restricting the bandwidth of the baseband luminance and chrominance signals to reflect the eye sensitivity to spatial and temporal picture details as well as using spectrum-saving transmission methods. Analog component video formats use similar baseband spectrum-saving methods but slightly wider bandwidth chrominance signals. The ITU R BT 601 4:2:2 video format specifies a luminance signal bandwidth of 5.75MHz and a chrominance signal bandwidth of 2.75MHz, slightly below the Nyquist frequencies corresponding to the related sampling frequencies but well above any analog composite signals such as NTSC, PAL or SECAM. After digitization, the three component digital signals are time division multiplexed into a 27Mword/s parallel bitstream and subsequently serialized. The serial bit rate equals 270Mb/s for a 10 bit/sample accuracy. While this signal can be comfortably distributed inside a teleproduction center, the high bit rate is unsuitable for transmission purposes or moderate cost and size digital videotape recorder applications and needs to be reduced. It is therefore necessary to compress the bit rate. Compression is usually affected by removing video signal redundancies.

Redundancy is best described as unnecessary data carried by a video signal. Since these data are unnecessary, removing them will reduce the bit rate without necessarily affecting the picture.

Video signals are ultimately decoded and displayed for human observers. The human eye, in conjunction with the brain, constitutes a precise imaging system. It can operate under a wide range of light intensities, recognize colors and perceive picture contrast as a function of picture detail (spatial frequency) and light intensity. Picture width and height, as well as the viewing distance, determine the perception of picture detail. The visual acuity of the eyes depends on:

Data rate reduction can be achieved using a combination of various tools. The aim is to achieve the bit rate reduction of the original signal to the minimum value that does not result in an unacceptable degradation of the picture quality level. The picture quality level is chosen for the intended application. A higher quality level is required for contribution signals (undergoing further processing in a studio) than for emission signals (direct-to-home broadcasts).

Taken separately none of these techniques can generate a significant data reduction. The success of the MPEG approach lies in the fact that it combines several techniques to achieve an efficient data reduction system. These techniques have resulted in the well-known intra-coded (I), predicted (P) and bidirectionally-coded (B) pictures approach which, if properly designed and implemented, results in good quality pictures at reduced bit rates. Essentially ITU R BT 601 4:2:2 quality pictures can be obtained with a 10Mb/s bit rate. Compare this with the original 270Mb/s bit rate!

Send questions and comments to: michael_robin@intertec.com