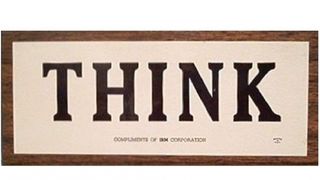 Back when IBM made huge mainframes and public school clocks, an IBM promotional sign hung in several of my childhood classrooms. The signs said “THINK” in large block letters. “THINK” was the one-word slogan developed by IBM founder Thomas J. Watson, Sr. early last century, and it lives on in the Thinkpad. It’s a powerful message, and as I later learned, the key to broadcast engineering.

Engineering managers quickly learn the importance of critical thought. In the case of broadcast television engineering, critical thinking is required to have a workable Plan B cued and ready at all times. TV is show business. The show must go on.

The one full-length prime-time newscast I was most proud to be associated with was produced during a major ice storm power outage, switched on a 10x router and mixed on a Shure M-67. We didn’t win any awards, but we put on a heck of a show in the worse possible conditions. When the broadcast studio lost its secondary power feed, we stayed on the air with what we could power from an ENG van generator. There was not enough juice for the news studio or production switcher, so we improvised. How I found myself in this situation is the basis of this tutorial.

I was chief at a station that didn’t have a studio generator. My predecessor and I asked for one on the capital budget for years, and every year we were shot down with the same response. It had become something of a joke in capex meeetings. Someone in corporate had determined that on average, we were off the air due to electrical service interruptions about two minutes each year, which works out to 0.0000038% of the time, and it usually occurred overnight. The worst slot machine in Las Vegas has significantly better jackpot payoff odds than that. The risk simply didn’t justify a $500,000 expense.

For better or worse, a brand new GM was at the station, and he found the ice storm situation unacceptable, especially as it went into a second day. He jumped up and down and the station got a honeymoon present from corporate — money to install a generator. The GM blamed the lack of a generator on me. At the time, I was rather insulted, but in retrospect, the GM was right. I had failed to do my job.

Broadcast engineering managers need a toolbox full of technology, solutions and the people skills it takes to lead a group of creative, intelligent people. The job also requires the ability to make spending money seem like a good idea. Some call this talent salesmanship.

Broadcast stations are sales organizations. As such, engineering managers must interface with sales people by speaking their language. Most other department heads are sales-oriented, and most GMs and above are or were salespeople. The best salespeople are risk-takers who love to be sold. I made my case for a generator by suggesting what a calamity it would be if we went off the air during the Super Bowl. But, what were the chances of that happening? Most thought that much money would be better spent on a new news set. Had I instead emphasized the benefits of the generator in supporting the station’s million-dollar branding project, I might have seen better results. Talking like an engineer to a group of salespeople is not the most effective form of communication. What most sales-oriented people want to know and relate to best are these five words: “What’s in it for me?” Anything else is fine print.

How do salespeople communicate? Most successful ones use what’s called the FAB model. FAB stands for features, advantages and benefits. Features can be seen and probably touched. A feature could be a color, a specification or perhaps a special function. An advantage is an attribute that makes what is being sold superior to other choices. Is it faster or cheaper? Is it demonstratively more effective than its competition? A benefit is perhaps better described as: What’s in it for me? What problem does it solve? What value does it add? How will life and/or business improve if money is spent on what you’re trying to sell?

People with sales experience will recognize and appreciate your use of the FAB model because it matches how they think and sell. It’s a very efficient and persuasive tool that's virtually invisible if you're not looking for it.

The key is to remember is that only you and your fellow engineers care about bits, bytes, nuts and bolts. What the people you are selling your ideas to care about is making money, because that’s what a sales organization does. If you can convince your peers they will make more money and continue making more money by agreeing with your recommendation, they probably will.

As predictable and prevalent as Murphy’s Law in broadcasting is the N+1 principle. It applies to technology and people but we’ll stay focused on technology. N stands for the number items you think will be necessary in the foreseeable future. The number N could be the number of channels, inputs, outputs, devices, monitors, multiviewers, vehicles, or just about anything else an engineering or news department might procure on a capital expenditure. The N+1 principle states that despite the most intense and diligent research, or how clear your crystal ball may have seemed at the time, odds are that N will nearly always prove to be one or more short of what is really needed.

You can take advantage of the N+1 principle by factoring it in your planning and purchasing, and it will make you look good in the process. I’ve heard it called headroom, spares, room to grow or future expansion, but those words are tough to sell in today’s more-with-less business environment. Instead, consciously factor N+1 into capital expenditures whenever feasible, and cross the two last things an engineering manager wants to do off your worry list. It’s cheap insurance for your career and facility.

Ignoring the N+1 principle is like building a rack full of equipment and cutting all the cables as short as possible. A non-engineering salesperson will see a rack wired like a guitar as looking slick and well-planned. A seasoned broadcast engineer looking at the same rack will see a future nightmare. Using the N+1 principle in planning and purchasing is like wiring a rack with adequate slack for quick changes and maintenance. It may look a little messy to non-engineers, but you know better. That slack, or the N+1 factor may ultimately prove to be the only reason the show can go on.