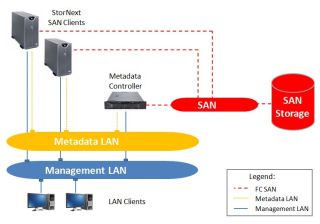 Many companies who have deployed Apple Xsan as a storage system are interested in selecting a new storage solution that is consistent with their longer-term requirements. In this paper we will discuss the key criteria to consider when selecting an Xsan replacement.

THE STRATEGIC OPTION
Many companies will find that they have two strategic options for replacing their Xsan storage system.

For companies that are satisfied with the scalability, reliability, and manageability of Xsan, there are several fibre channel (FC) SAN solutions based on the same StorNext file system used with Xsan, and these can serve as a logical upgrade path.

For companies who would prefer to move away from StorNext-based FC SAN solutions, Ethernet-based storage is an excellent alternative. Clustered NAS systems can provide simple, high performance solutions that can be used for video workflows. Going one step further, the Omneon MediaGrid storage system combines clustered file system technology with a File System Driver that enables true parallel access, delivering the performance of SAN with the simplicity of NAS.

IS FIBRE CHANNEL SAN THE INFRASTRACTURE YOU WANT?
If you have deployed Xsan and are looking for a replacement, the first question to consider is whether you want to continue with a similar Fibre Channel SAN solution, or if you want a different approach.

With Apple Xsan you have been utilizing a solution that is based on an external file system called StorNext, which is supplied by Quantum, and which has been integrated as part of the Xsan solution. If you want to continue utilizing an FC SAN infrastructure, then your most logical options will be other solutions based on the StorNext file system, and which are simply integrated with other vendors’ hardware. For example, Data Direct Networks, NetApp, IBM, Xyratex, and others offer FC SANs that integrate their hardware with the StorNext file system. As these systems will have different hardware they will have different levels of capacity and performance than Xsan, though they will have many of the same key system-level characteristics as these are driven by the StorNext file system. These systems will often require a three-network topology, as shown below, with a SAN for storage, one metadata LAN, and one management LAN.

StorNext-based FC SAN systems may provide the ability to achieve high levels of performance, and to scale the system to large storage configurations. If you are happy with the capabilities of Xsan, including scalability, manageability, reliability, and consistency of performance, then moving to another StorNext-based FC SAN is a reasonable approach.

ETHERNET-BASED STORAGE SYSTEM
The alternative to FC SAN is Ethernet-based storage. Ethernet is fast, simple, and cost-effective, and is a technology that is enjoying a “virtuous cycle” - because it is simple and cost effective, many companies widely deploy it, and wide deployment means networking technology companies can accelerate investments to make Ethernet even faster and more cost-effective. Because of this, many industry experts have a very favorable view of Ethernet as a foundation infrastructure technology, and many companies are making Ethernet their strategic infrastructure of choice for storage and other uses.

Ethernet-based storage systems result in a simplified infrastructure: there is no complex SAN to deploy and manage, and the need to qualify and manage deployment of expensive FC SAN HBAs for each server is eliminated.

There are several available alternatives for Ethernet-based shared storage systems.

TRADITIONAL NAS SYSTEMS
Network Attached Storage (NAS) systems are attached to an Ethernet network, and are accessed via standard protocols such as CIFS and NFS. NAS systems are popular because it is relatively simple to deploy and manage an environment of a few NAS systems.

Traditional NAS systems typically consist of two controllers (or “NAS heads”) in a failover configuration, so that if one controller fails, the other takes control of the failed controller’s disks and continues operating. The controller hardware defines the performance of the system; once a controller is “maxed out,” the only ways to get more performance are:

-Manually re-distribute the workload across multiple NAS systems, which can become a significant management challenge as the environment grows

-Buy a larger NAS system, which requires a disruptive “forklift upgrade,” and move your data to this new system. The new system is typically over-provisioned in order to meet longer term growth requirements.

CLUSTERED NAS SYSTEMS
To address the scalability limits of traditional NAS systems, vendors have developed clustered file systems which can effectively join many controllers together and present them as a single image. If additional performance or capacity is required, then additional controllers can simply be added to the configuration. The scalability of clustered NAS systems makes them a viable candidate for video workflows, and with the simplicity of managing a large environment that presents a single image, some vendors who provide such systems are increasingly focusing on Enterprise applications.

Like their predecessors, clustered NAS systems are accessed via standard NFS and CIFS protocols. This approach maintains simplicity, though it limits performance as each NFS or CIFS access must go to a single IP address, i.e., through a single network interface. Any distributed processing must take place via a back-channel in the storage system itself.

OMNEON MEDIAGRID
Omneon MediaGrid, a shared storage system by Harmonic, builds on the clustered approach. Like clustered NAS systems MediaGrid uses a clustered file system to scale performance while maintaining a single system image, and can be accessed with standard CIFS and NFS protocols. However, MediaGrid takes a step further by being able to deliver higher performance via a File System Driver. The File System Driver is software that resides on the client, and enables true direct parallel access to multiple storage nodes through multiple Ethernet connections. The MediaGrid approach enables higher performance, and unlike many alternative systems, maintains consistent high performance over time.

MediaGrid is optimized specifically for the unique, demanding requirements of video workflows, and has been tested and optimized with dozens of the leading media applications.

SELECTING A STORAGE SOLUTION
When evaluating alternative storage systems as your Xsan replacement, the following criteria should be considered:

Does the system have the performance you need? Video workflows require a system that delivers high bandwidth and low latency.

Can the system non-disruptively scale? If scaling issues have been problematic in your environment, then consider looking for a storage system that allows for performance and/or capacity to be increased without disrupting users or applications.

Does the system maintain consistent performance? This is typically a file system characteristic, and many file systems suffer from performance degradation that increasingly impacts performance until the file system is de-fragmented...at which point the cycle starts again.

Does the system work well with your applications? Look for a solution that is qualified with key applications in your video workflow, and which is provided by a company familiar with these applications.

Is the system cost-effective? System functionality and performance must come first but the solution must still have a competitive price. Rather than focusing on “price per GB of storage,” focus cost evaluation on “price per GB/second of bandwidth,” costs of the supporting infrastructure, and management costs.

Are tools available to simplify data migration? You currently have data on Xsan, and you’ll need to move it to your new storage system. An ideal way to do this is a gradual migration of data from the old system to the new system.

THE HARMONIC SOLUTION
The Omneon MediaGrid shared storage system from Harmonic is often an excellent fit as a replacement for an Xsan system.

-Is based entirely on Ethernet, which is a simple, cost-effective infrastructure and an excellent long-term technology foundation.

-Delivers exceptional performance via a simple File System Driver (FSD) that resides on the client. The FSD enables higher performance through true parallel access, by slicing files into segments that are distributed and accessed across multiple storage nodes and multiple network interfaces.

-Non-disruptively scales, enabling additional capacity and performance to be added in just a few minutes, without impacting users or applications.

-Is optimized for video workflows, with features such as the ability to edit a growing file.

-Is qualified with dozens of key media applications, giving you peace of mind that MediaGrid will work, and work very well, with the applications you rely on.

-Is proven in demanding video workflows by customers such as CNN, BBC, NBC with their coverage of the Olympic Games, and Modern VideoFilm.

-Is cost effective both to deploy and manage, and often provides a significant price/performance advantage relative to competitive systems.

-Is qualified and optimized with tools that simplify Xsan migration. MediaGrid is tightly integrated with Harmonic’s Media Application Server product (“MAS”), which allows both the Xsan and MediaGrid systems to seamlessly co-exist while data is gradually migrated.

-Supports collaborative editing and all of the key editors, providing you with the flexibility to mix and match the editing solutions you want, and to have them all simultaneously share the same content.

-Supports Windows, Linux and Unix clients. The File System Driver is certified with current releases of all key clients, and MediaGrid storage can also be accessed via standard NAS protocols such as CIFS and NFS.

For companies who would prefer to move away from StorNext-based FC SAN solutions, Ethernet-based storage is an excellent alternative. Clustered NAS systems can provide simple, high performance solutions that are good fits for video workflows. Omneon MediaGrid by Harmonic is an excellent fit for these workflows as it delivers higher levels of performance than clustered NAS, is easily scalable, maintains consistent performance over time, is qualified and optimized with key media applications, and is provided by a company focused on media with a deep understanding of media workflows.