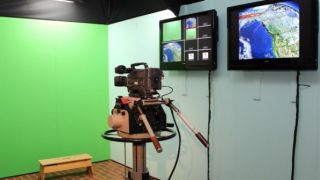 Visitors to the Oregon History Museum in downtown Portland are reliving the Columbus Day Storm of 1962 with the help of professional video and audio systems integration firm Advanced Broadcast Solutions (ABS). Presented by Portland General Electric, “The Mightiest Wind” exhibit includes an area engineered by ABS, where patrons can act like a meteorologist by standing in front of a green screen and creating a video weather report.

Considered the most disastrous weather event in Oregon’s history, the Columbus Day Storm was blamed for almost 50 deaths in the region and had damaging wind gusts that knocked out power in some locations for several weeks. According to Marsha Matthews, director of museum services, response to the exhibit has been positive.

KGW, the NBC affiliate in Portland, which is a media sponsor and partner for the exhibit, loaned the museum some video equipment, including a video camera and pedestal. The station also provided file footage and new video interviews for the exhibit, and KGW chief meteorologist Matt Zaffino is serving as a guest curator. KGW’s director of technology, David Boyd, helped the museum connect with ABS to create the green screen area.

ABS designed and installed the system, coordinated content with KGW and provided training to the museum staff. Using a Blackmagic Design ATEM switcher, LaCie LaCinema PlayHD media playe, and Litepanels LED lighting, ABS was able to create an operational and cost-effective weather video production demonstration. Set-up took less than two days. The green screen area of this exhibit has been a huge hit with museum visitors. The Columbus Day Storm was a significant event in Oregon’s history, and ABS is thankful that KGW helped contribute to the project.