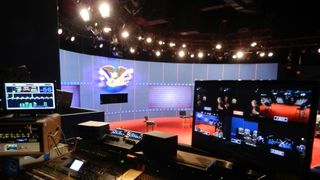 When Mitt Romney and Barack Obama squared off at Hofstra University on Tuesday, Oct. 16th, a pair of Yamaha DM2000 consoles were on site to make help ensure that the candidates and the 60 million plus audience were able to hear every word spoken.

This, the second presidential debate of 2012, was also the second hosted by Hofstra in recent times; then Senator Obama debated John McCain at the university in 2008. Audio equipment for this week’s event was provided by Las Vegas based On Stage Audio.

“Size and audio I/O capabilities also played a key role in the set up,” says Abbott. “We routed six Yamaha AD8HR 8-channel preamps to eight groups: four for the house mix and four for the broadcast pool truck.”

For more information on All Ears, Inc., e-mail michaelsound@earthlink.net. Information on Yamaha can be obtained by visiting the company website, www.yamahaca.com