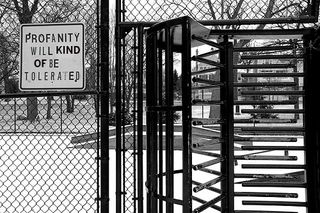 INFINITY and BEYOND: Nine of the brightest legal minds in the Milky Way with a collective 141 years of service on the highest court in the United States of America punted this week on TV indecency. Again. This has been going on since I was a younger, firmer version of myself with much greater prospects. The issue of just how to define, redefine, regulate and enforce indecency standards on TV is stuck in a perpetual loop between the Supreme Court and lower federal courts.

It goes like this. George Carlin recited a litany of seven dirty words on WBAI-FM in New York 39 years ago. Gasping took place, and the Federal Communications Commission censured the radio station. WBAI, a Pacifica affiliate, appealed. The U.S. Court of Appeals for the D.C. Circuit dismissed the FCC censure. The Supreme Court overruled the federal court in FCC v. Pacifica, and thus was born the federal standard for broadcast indecency: Content airing on broadcast TV between the hours of 6 a.m. and 10 p.m. that describes or depicts “sexual or excretory organs or activities,” patently offensive by community standards and lacking in “artistic merit.” The ruling was based on the premise that broadcasting was “uniquely pervasive.”

Now, nearly four decades later, the same law stands in spite of estimates that there are more cellphones than carbon-based life forms in this country. That, and behaviors heretofore unheard of, even in the coarsest of company, can be viewed online 24/7. I’m told.

Cut to the 2003 live telecast of the “Golden Globe Awards” during which Bono said his win was “F-ing brilliant.” The FCC under Michael Powell determined that Bono’s usage was OK because the man is from Ireland, for heaven’s sake. Moreover, he wasn’t exactly describing “sexual or excretory organs or activities.” He was modifying “brilliant.” Federal indecency laws, perhaps tragically, were not written by grammarians.

Powell then left to become a millionaire lobbyist like you do when you’ve been an FCC chairman. Kevin Martin took over and went after Fox for F-words delivered on-air by Cher and Nicole Richie. Cher used it as a verb directed at Hollywood critics who considered her too much of a crone to be relevant. Miss Richie was modifying the term, “easy,” to illustrate the difficulty in removing cow dung from a handbag made of the same animal. Both made the calamitous mistake of not being Irish, and possibly males of the Caucasian persuasion.

Mr. Martin was OK with Tom Hanks tossing around F-words in “Saving Private Ryan” on ABC. He was otherwise disposed toward blues musicians in a PBS documentary, Cher and Miss Richie. He censured Fox. Fox appealed on several points, including the First Amendment. Broadcast TV was no longer “uniquely pervasive,” after all.

The U.S. Court of Appeals for the Second Circuit in Lower Manhattan said the FCC was being “arbitrary and capricious” and ruled for Fox without going into the First Amendment issue. The FCC appealed to the Supreme Court which... punted! They told the lower court to decide on the First Amendment question, so the lower court said, “fine.” It ruled that the FCC’s indecency policy was “unconstitutionally vague.” So the FCC appealed again—perhaps you are detecting a pattern here—and this week, the high court once again overruled the lower court by saying what the lower court said to begin with, only in different words: That the FCC’s indecency policy was clear as mud.

However, where the ruling of unconstitutionality enjoined the FCC from going after broadcasters for the conceits of massively overpaid celebrities, it can now fine the pants off the networks once again. It just has to do so consistently. That seems unlikely, given the commission’s record over the last 10 years. Consequently, it would behoove the networks to accept Justice Ruth Bader Ginsburg’s invitation to settle this dog’s breakfast once and for all:

“In my view, the court’s decision in FCC v. Pacifica Foundation was wrong when it was issued. Time, technological advances and the commission’s untenable rulings in the cases now before the court show why Pacifica bears reconsideration.”