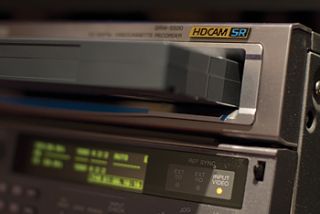 ORLANDO, FLA.—When the earthquake and subsequent tsunami struck Japan, it had the unexpected consequence of impacting digital media supplies throughout the world.

These events interrupted operations at Sony's Tagajo facility in the Sendai area, which has the primary responsibility for tape coating and disc manufacturing. With the plant off-line, various formats, including HDCAM-SR, Digital Betacam, XDCAM discs, SxS cards and others have been affected. Although alternate manufacturers exist for some of these formats, the unique coating for HDCAM-SR tape leaves Tagajo as the sole facility in the world that can manufacture it.

Photo by Lane Savage Major U.S. studios and television networks have standardized on the HDCAM-SR format as their main deliverable because of the additional audio tracks that can be carried on the same piece of media. Likewise, XDCAM discs have become a popular acquisition format for many program producers. Suppliers kept their inventories at relatively low levels, so the available stock quickly ran out, which left production companies, post houses and networks scrambling to deal with the situation.

Mark Raudonis, vice president of post production at Bunim-Murray Productions ("The Real Word," "Road Rules," "Keeping Up With The Kardashians," "Project Runway"), explained the impact: "We use XDCAM discs primarily for acquisition. The price has skyrocketed since the tragedy in Japan. Even though the discs are available from other manufacturers, taking Sony's production off-line has caused shortages and hence the price hike. The XDCAM disc shortage is more crucial for us [than HDCAM-SR], since we use such large quantities. We're watching the market very carefully and buying only as needed." For the moment, Bunim-Murray intends to stick with the XDCAM format and isn't considering P2 or other solid-state alternatives.

Post houses are hardest hit by HDCAM-SR availability, since they have to master to this format for network delivery. Terence Curren, president/founder of Alpha Dogs Post Production in Burbank, Calif., noted, "Most of our deliveries are on HDCAM-SR with at least eight channels of audio. Discovery Networks, for example, requires a very specific audio configuration, which gives them great flexibility to strike the various delivery masters they need from one master tape. Fortunately, we stocked up on HDCAM-SR tapes before they disappeared. So, we look good as long as Sony gets their plant back up by summer."

These issues leave facility managers and editors weighing their options, including other tape formats and a faster transition to file-based mastering. Andrew Stern, Promotions Editor at Comedy Central in New York, points out, "We generally prefer that content be delivered on HDCAM-SR. Comedy Central Brand Creative has recently started receiving more digital copies of promo material via FTP in place of tape. The standard delivery codecs have been [Apple] ProRes HQ and [Avid] DNxHD 220. When we do receive tapes, most of the material is now delivered on [standard] HDCAM, foregoing surround audio, as well as some of the additional audio tracks required for other purposes. There is a comfort level with tape that's not there yet with files.

"On several occasions after a long file download, we discovered that the file was corrupt," he continued. "Tape capture is also faster than transcoding media for a specific NLE or graphics workstation. We don't always have the right codec for plug-and-play editing, depending on where the edit is taking place."

Curren echoes these concerns, "One unintended advantage to the tape-based world is that the cost of re-engineering a tape format—and the cameras and decks that utilize it— is enormous. As a consequence, there is a finite and easily managed number of formats in use. With file-based delivery, any hacker in a garage can come up with the 'next great codec.' So, we have a plethora of choices and no real standards. It is difficult right now to get a file to look the same when moving between the top-end post production software packages."

Isai Espinoza, audio mixer for Alpha Dogs in Burbank, Calif. One short-term strategy is to recycle older tape stock. "We have been sending out a lot of our older stock for re-certification for just this reason," Curren said. "Even the networks are pushing for us to recycle our stock."

This doesn't seem to be a viable solution for all users, though.

"We've certainly cleaned out our internal shelves of recyclable HDCAM-SR stock," said Raudonis. "The cost on the open market for even recycled HDCAM-SR stock is too high. We've switched to HDCAM until the supply returns, which really made it a nonevent for us. We have already been delivering long form shows directly to the network ops centers as digital files. We've found that more networks are now making this method of receiving program masters a reality. Unfortunately, they still want a tape backup. What will change, I believe, is that this tape backup will soon become an LTO5 digital data tape rather than a specific videotape. I can see that happening sooner than later."

IMPACT ON OTHER FORMATS LIMITED

Darin Scott, senior vice president, Media and Applications Solutions for Sony, is optimistic about restoring production. "For HDCAM-SR, we expect recovery of production to resume around the end of July, followed by gradual increases in production," he said. "The impact on other formats was limited. For example, Sony has already restarted the disc assembling process in conjunction with the recovery of the assembling operations. At the Tagajo factory, Sony is targeting end-to-end disc production to resume around the end of May, with production capacity gradually increasing."

According to Stern at Comedy Central, the big issue involves the fact that digital assets need to find a stable, economical storage solution. That is "something we are still working on," he said. "Current circumstances have been a major catalyst for embracing a world without tape. Will we ever need to go back?" Yet, the investment in HDCAM-SR hardware is still relatively recent, so production companies like Bunim-Murray haven't given up on the flexibility that videotape offers. Raudonis concludes, "Yes, we'll return. The advantage of having the extra audio tracks available with HDCAM-SR is too appealing to ignore. When the supply returns so will we."