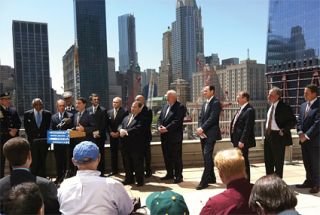 NEW YORK—Last month the FCC announced its rollout of a new alert system designed to send emergency warnings to mobile devices. In a press event at Ground Zero in New York, Mayor Michael Bloomberg, FCC Chairman Julius Genachowski and FEMA Administrator W. Craig Fugate, along with top executives from the major wireless carriers, announced that PLAN, the Personal Localized Alert Warning system will be online in New York City by the end of 2011. PLAN is required to be implemented nationwide by April 2012, which means New York City will be an early adopter.

FCC Chairman Julius Genachowski, New York Mayor Michael Bloomberg, FEMA Administrator W. Craig Fugate, and top executives from the major wireless carriers, announced the rollout of PLAN at Ground Zero last month. U.S. citizens have been served by the same EAS system since 1997 (an update to the Emergency Broadcast System, which was put into place in 1963), which primarily relies upon radio, television, and the National Weather Service radio alert service. The FCC chairman touted the new service as a way to bring emergency alert systems into the 21st century and reflect new modes of communications.

"Communications technology, and in particular mobile broadband, has the potential to revolutionize emergency response," he said. Bloomberg said, "given the kinds of threats made against New York City at the World Trade Center, Times Square, and other popular places with visitors and tourists, we'll be even safer when authorities can broadcast warnings to everyone in a geographic area, regardless of where they came from or bought their phone."

Administrator Fugate added that the new technology "could become a lifeline for millions of Americans and is another tool that will strengthen our nation's resilience against all hazards. Following the devastating tornadoes in the Southeast, we are witnessing yet again the critical role the public plays as a part of our nation's emergency management team. Making sure that they get useful and life-saving information, quickly and easily, right on their mobile phones, will help more people get out of harm's way when a threat exists."

The new mobile device alert system is based on the CMAS requirement, which is part of the WARN Act.

In short, CAP-formatted messages generated by local or state emergency information managers will be forwarded not only to local broadcasters, but also to the FEMA IPAWS aggregator. National emergency information will be delivered directly from the national level by the "aggregator," which will distribute the message through all means authorized. The aggregator will have interfaces to distribute messages to traditional broadcast media via the EAS, to cellular devices via the Commercial Mobile Alert System (CMAS), to NOAA Weather Radio, to Internet services via network interfaces, and to unique state and local systems that are IPAWS CAP compliant (such as Emergency Telephone Networks, Radio Broadcast Data Systems, siren, and/or signage systems). The governing federal agencies responsible for EAS are the FCC, FEMA, and NOAA's NWS.

While most broadcasters are familiar with EAS, AMBER, and now, WARN, IPAWS and CAP XML protocol, CMAS is the latest subject to hit the press and may be the least understood. Basically, CMAS allows emergency information to be distributed to cell phone users, free of charge (as long as there is an active wireless subscription). There will be three types of CMAS alerts:

All but Presidential Alerts will allow the subscribers to opt-out of notification. These alerts are eventually expected to reach 87 percent of the population (about 270 million subscribers). The 90-character (limit) alert messages will contain five elements in the following order: Event Type or Category, Area Affected, Recommended Action, Expiration Time (with time zone), and Sending Agency. While a second language may be available in the future, current technology limits the messages to English only. The alert tone will be very specific for both polyphonic and monophonic devices, and can only be used for CMAS Alerts. In vibrate mode, there is a specific pattern as well, which can only be used CMAS Alerts.

One feature of CMAS that is similar to EAS is the fact that there will be required monthly tests. For CMAS, however, the tests will not reach the end user. Each local wireless infrastructure will have test and compliance logging. According to Brian Josef, assistant vice president, regulatory affairs for CTIA—The Wireless Association, "we don't want to have the subscribers de-sensitized to the alerts; we feel that it will detract from their effectiveness."

Unlike EAS, which interrupts broadcasts, a CMAS Alert will not interrupt a phone conversation or data session. Richard Rudman, vice chair-California EAS State Emergency Communications Committee, says "if CMAS warnings do not interrupt calls or data sessions, it could render the system useless. People should be able to opt-in for interruptions and the monthly tests."

While participation by the wireless carriers is voluntary, the carriers have already had to opt in or out, according to Josef. With the carriers already committed, Josef indicates that 97 percent of subscribers will be covered by CMAS in the U.S.

Another choice for wireless customers to receive emergency information is the availability of FM receivers in their mobile devices. While there is some heated opposition by the Consumer Electronics Association, CTIA—The Wireless Association, and the music recording industry against the NAB's push for mandated FM chip placement in mobile devices, many mobile devices are already available that are FM enabled. "With 41 FM equipped handsets currently available to wireless customers, the CTIA doesn't see the need for any technology mandate," Josef said.

For FM-enabled devices, there are technologies such as AlertFM (CAP compliant) that can provide targeted-first alerts, and even "awaken" mobile devices for emergency alerts. Recently, Pickens County, Alabama, Emergency Management Director Ken Gibson confirmed that the ALERT FM system functioned exceptionally well, and without interruption, during their multiple tornado storm warnings. According to AlertFM, one advantage of the FM-based delivery system, in contrast to just cellular signals, is that FM cannot suffer from overloads placed on the system, most notably during high-volume usage like in an emergency.

While Rudman acknowledged that "for survivability, the U.S. needs many different alert platforms, including TV, radio, and mobile—and although mobile technologies like CMAS will alert the public—the populous will turn to tried and true sources for further information, such as television and radio for in-depth real-time reporting."