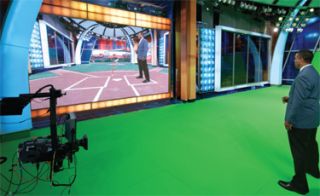 BRISTOL, CONN.—There is little doubt that Major League Baseball is currently quite healthy. This has not been missed by broadcasters, who have sought their own deals with the MLB as well as particular teams.

For Jed Drake, ESPN's senior vice president and executive producer of production, it's also a good time to retool the way baseball is broadcast to the home audience.

Virtual Pitch, a joint project with Sony and the MLB, debuted during the 2010 World Series playoffs. This season, the app will go beyond pitching to include batting and fielding analyses too. High on ESPN's agenda this season are new ways of presenting statistics.

"That's a whole area where we're just starting to drill into now with heavier concentration," said Drake. "Viewers are going to be able to understand the game to a better level than they ever have before."

IT'S ALL ABOUT THE STATS

"When you can measure those things at a hundredths of a second, what you start to realize is how beautiful the game is because the difference between success and failure is generally in only hundredths of a second," said Drake. "Being able to define what is successful and what is failure in terms of the interaction between offense and defense is fascinating and fabulous."

Implementing the initiative was charged to an in-house emerging technology team located in a handful of locations: ESPN's home base in Bristol, Conn.; Orlando; "Princeton" (Lawrenceville), NJ; Dallas and Emeryville, Calif. (Princeton came on board after ESPN acquired PVI Virtual Media Services last December.) The multilocation team is headed up by Anthony Bailey, vice president of emerging technology for ESPN.

"We started working on baseball in the middle of July," said Bailey at press time.

Three projects ready to go for the new season are updates for last year's Diamond Track and Virtual Pitch apps and an MLB Depth Chart.

"It's a system that really helps us specifically define time and distance in a way that explains baseball, according to Drake. "It's going to be even a more robust system this year—new analyst Bobby Valentine actually sat down and worked with our technology folks to help them make a system that will be even more tailored toward this view of baseball."

The system was introduced during the July 25, 2010 Sunday Night Baseball telecast of a Cubs-Cardinals game to analyze the action in replays. It consists of a high-home camera, EVS and Diamond Track software on a laptop serviced by a dedicated operator. The operator marks where each player is on the field then, once the ball is in play, the system tracks the players from their respective starting points to their final destination, as well as timing how long each player took to arrive. An EVS feeds the video into the Diamond track system.

David Price of the Tampa Bay Rays in action during a 2010 regular season game versus the Los Angeles Angels of Anaheim at Angel Stadium of Anaheim. Photo by ESPN. Bailey said that an improved user interface has already made turnaround time a lot faster.

"We can turn it around on the second replay—before the next pitch," he said. "We are working with [the former] Virtual Media Services to utilize some of the stuff they've done in player tracking to make this more automated."

Drake described this as baseball's version of what ESPN did for the 2010 World Cup coverage.

"We actually insert announcers into the environment in a way that fits baseball very well, especially as it relates to pitching."

Debuting during the 2010 World Series playoffs, the app will go beyond pitching to include batting and fielding analyses too. It's a joint project with Sony and MLB.

"It's really taking the virtual world and utilizing all the assets that Sony built in their games and real life data supplied to us from MLB and merging them together to really show what's going on—what players are seeing and how they're reacting," said Bailey. "We're using it as a teaching tool to show what could happen—why [a pitcher] gets around on a split finger fast ball better than anyone else."

"We're creating an MLB Depth Chart application that our talent will be using on camera," said Bailey. "They'll be able to dive in further for stats and info on the team roster."

The tech team is also producing a customized stat screen for its production truck that will let anyone who works on the show access to these stats.

"It's a new streamlined way of presenting data internally so that our producers, directors and talent can follow the game and follow story lines," said Bailey. "We're utilizing a local area network to bring it all together."

The remote application debuted during the 2010 "Monday Night Football" season and was later adapted for NBA coverage. Bailey noted that there's now also an iPad version.