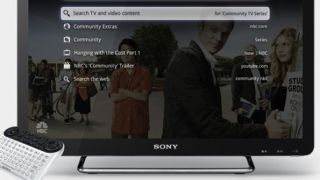 Satellite TV and cable television, as well as mobile TV, could see a new player on the landscape, and that player is Google. The company has certainly expanded beyond search, and it could be easy to see where it's heading. But if you take a step back and look at the bigger picture, it may become clearer what direction Google is really targeting.

The satellite TV provider Dish Network has been accruing a large amount of wireless spectrum for a while now. So much so that it now makes sense for the company to align with a partner. The usual suspects have all been mentioned for alliances: T-Mobile, AT&T and Sprint are all names that have been tossed around. But one name mentioned this week, Google, is looking like less of a wild card and more fitting with the companies' master plan.

As Dish Network awaits FCC approval of its satellite-related spectrum, Google could stand to benefit the most from working with Dish. Consider what it has been brewing for the past few years. Its Android mobile operating system is one of the largest in the world, and drives millions of smartphones and tablets. It has created its own tablets and phones — the Nexus line — and licensed its OS to many other companies. The Android OS moved to TV with the launch of Google TV, which offers a device that allows downloading of TV-related apps. Although Google TV has been off to a slow start for, well, about a year now, partners like Sony refuse to give up on it and the interface continues to be refined and improved. Google this week also launched Google Fiber, a new type of internet company that offers connect speeds light years beyond current broadband options. Google is roping in its Nexus 7 tablet as a control device for Google Fiber, and offers Gigabit internet packages as well as Internet plus TV options. Google Fiber could be the halo effect that the company has been searching for, a service that gets consumers excited about what else that Google has available.

At this point, the only other place to go is up. Up as in satellite. Google having access to Dish’s spectrum could really advance its master plan. The alliance would certainly provide credence and signify that Google is a multi-platform player. With the integration of Google’s tablets in with its fiber service, as well as an alliance with Dish Network, mobile TV could be the next big push. Having streaming options available on Android and the Web would almost see Google coming full circle, back to where it all began, with a simple but powerful search engine.

Time will tell, and it will be a while before Google and Dish, or any spectrum owner, could be married, but just the fact that Google’s name is coming up in negotiations, signifies that Google could be having its master plan coming to fruition — having the Google brand be everywhere on multiple services, all designed to carry information and entertainment direct to consumers in new and exciting ways.