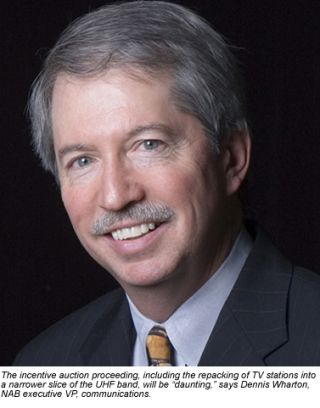 The FCC voted unanimously Sept. 28 on a Notice of Proposed Rulemaking regarding incentive auctions that aim to clear TV spectrum for mobile broadband use.

The incentive auction process will proceed in three steps: reverse auctions, in which TV broadcasters looking to exit the business or relinquish a part of their spectrum submit a bid amount they’re willing to take for their spectrum; a repacking of the remaining UHF band; and a forward auction of the spectrum to wireless carriers.

Broadcast Engineering: The FCC approved a Notice of Proposed Rulemaking Sept. 28 regarding how it proposes to conduct incentive auctions of TV spectrum. What’s NAB’s overall perspective on the proposals in the notice?

Dennis Wharton: Well this is truly uncharted territory. It’s probably going to be the most complex auction ever conducted. Commissioner McDowell says it’s the most complex proceeding he’s seen in his seven or eight years on the commission — the FCC.

So obviously, NAB is going to be very engaged every step of the way. Our concern and our focus is on protecting those broadcasters who choose to remain in business. Obviously there will be a few — we don’t know how many broadcasters are going to take advantage of this opportunity to voluntarily go out of business. And, the key word there is voluntary because there will be no forced taking of spectrum.

But the concern is that through this process that broadcasters who choose to remain in business have remained unharmed, and the millions of viewers we serve will not suffer as a result.

Broadcast Engineering: Part of the proposal is how repacking of the spectrum will be done. Has NAB had a chance to look at those proposals and what the view is of the approach that the commission wants to take in terms of preserving the population that individual stations cover?

Dennis Wharton: We haven’t seen the proposal because the FCC still hasn’t put out the proposal. They basically voted, essentially, last week sort of on a press release because the actual edits to the proceeding were still not incorporated into the final text so we are expecting something like 150 pages of this rulemaking to be actually release sometime this week. They said no later than Friday. So, we’re still somewhat in the dark on this as to what the impact would be.

But, what it means is when they actually put out the final text, that gives us time. I think Dec. 21 is when NAB and all other interested parties can comment on the proposal, and then there’ll be reply comments a couple of months later and then they probably will adopt the rule sometime, maybe, in the spring or so.

There still is a lot of uncertainty as to what will be in the proposal.

But you are right, the repacking is the big enchilada here in terms of they are going to shrink the TV band. Depending on how many volunteer TV stations they get to go out of business, and our concern is there could be interference implications, not only for the TV stations that are moving from one channel to another, but the stations that stay on the same channel will be impacted by another TV station moving to a closer spot on the dial.

So, it’s going to be very complex and raise a lot of questions, and that’s why we have to be sort of vigilant to protect all of the viewers who rely on over-the-air broadcasting for their only source of television across the United States.

Broadcast Engineering: There is an interlocking nature to the way stations are assigned channels. This requires engineering studies. I was wondering how can this whole process proceed in terms of repacking short of having agreements or treaties in place with Canada and Mexico regarding those places along the borders where the U.S. stations’ use of spectrum is dependent on where our neighbors are using spectrum?

Dennis Wharton: You raise a great point. The northern border issue is sort of the unforeseen problem area here that’s not really gotten enough attention in our view. Under the original FCC National Broadband Plan, which was adopted two or three years ago, if the FCC or Congress would have adopted that plan, after the repacking process, according to our engineers there would have been no place for a lot of TV stations along the northern border to go.

In fact, all of the TV stations in Detroit would have been left without a home because there are treaty obligations that we have assigned with Canada that assign channel allotments for Canadian broadcasters and because they were skinnying down the TV band and there were too many channel allotments already taken up by Canada, the U.S. stations in Detroit wouldn’t have had any place to go.

And, it’s not just a Detroit issue. It’s from Spokane, WA, all the way across the northern border to Bangor, ME, TV stations in Cleveland and Minneapolis and all along the border, even Pittsburgh, and stations in states that don’t even butt up against Canada would have been affected. There is a daisy chain effect here that the FCC is going to have to deal with and address. You know they claim they’ve been having discussions with Canada.

So, this sort of speaks to the complexity of this issue. It’s going to be a daunting proceeding. And you know, there was a reason the Congress gave the FCC 10 years to actually get this thing done. The FCC has a lot more ambitious timetable — something like two years before they expect to have the auction, but it’s going to keep a lot of engineers and a lot of lawyers in Washington very busy for many, many months and years.

Broadcast Engineering: Commissioner Pai acknowledged in comments released following Friday’s vote that the $1.75 billion set aside for the Broadcaster Relocation Fund may not be sufficient to compensate broadcasters and cablecasters for the expense of repacking. Is NAB planning to ask Congress to raise the fund limit, or are you taking some sort of other action as relates to that amount?

Dennis Wharton: First, we appreciate commissioner Pai’s comments because that’s a big issue if you don’t have enough money to address this issue, then where do you get the money? But, it’s a little premature since we haven’t even seen the text of the actual item to be going to Congress and asking additional protections or revenues to cover those broadcasters who repack.

The other question is just how many stations are going to volunteer to go out of business. Part of the reality is I think this FCC National Broadband Plan, at least, was premised on the notion that broadcasting is somehow a dying business, or it’s seen its better days.

That’s just factually false. Broadcasting is a terrific business. We’ve bounced back from the worst advertising recession since the Great Depression and stations are doing quite well, thank you very much.

Automotive, which is a huge driver of revenue — advertising from automotive companies has roared back. Retail advertising has come back strong. Obviously, political advertising is strong this year. But, I mean the long-term outlook for broadcasting is very positive. We have the cordcutting phenomenon where consumers by the millions are cutting the cable cord and going back to over-the-air TV.

So, this notion that broadcasting is somehow now a higher and better use of spectrum than broadband is also not accurate. What’s better and higher use than providing a free and local service to every community in America, where you are providing the best quality entertainment, local news, lifesaving weather information, rescuing kids who have been kidnapped with Amber Alerts? That’s a pretty high and better use of spectrum than I can think of.