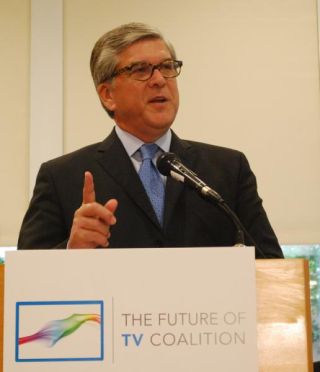 The chief of the NAB urged FCC chairman Julius Genachowski last week to approve the applications for merger of T-Mobile and MetroPCS, saying the deal shows the power of the free market to address the spectrum demands of wireless carriers.

In a letter dated Feb. 12, NAB president and CEO Gordon Smith asked the chairman to move forward expeditiously with approval. Smith called the deal the most recent in a series of transactions the wireless industry is using to reorganize and make more “effective and efficient use of its unrivaled commercial spectrum allocations.”

The merger “further demonstrates that the free market remains the most dynamic means to address the purported spectrum challenges faced by wireless carriers today,” Smith said in the letter. The applications to merge the two wireless carriers were filed almost four months ago.

The letter from Smith comes as the FCC is engaged in a rulemaking proceeding to facilitate incentive auctions of television broadcast spectrum, including a repacking of the TV band, to free up additional spectrum to be auctioned to wireless carriers as a way to help satisfy demand for video carried over their networks.

In asking to merge, T-Mobile told the commission that joining with MetroPCS would “address major spectrum constraints” facing both companies “by combining their highly complementary spectrum portfolios.”

Smith said the merger is part of “an essential transformation” in the wireless industry over the past year. “Wireless carriers have responded to the initially surprising surge in demand for data by restructuring to rationalize their considerable spectrum holdings,” Smith said in the letter.

Smith pointed to other steps by wireless carriers aimed at making more efficient use of their spectrum, including: Verizon Wireless’s 2012 purchase of nationwide AWS spectrum from SpectrumCo; AT&T’s 2012 acquisition of the remaining 2.3GHz WCS band that it didn’t already own; Sprint’s ongoing acquisition of Clearwire; and the ongoing effort of T-Mobile to acquire MetroPCS.

Commending the wireless industry for these efforts, Smith said “it is increasingly apparent that the remarkable power of the free market is enabling wireless companies to address many of their spectrum concerns.”