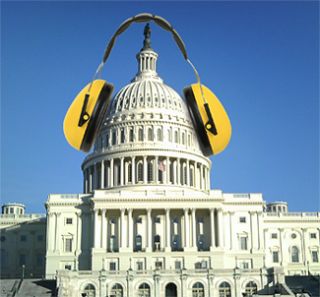 Some readers may recall that I promised to write about subwoofers this month. Well, that basically worthy topic (get it?) has been put off for a month so I can share with you a little more about the CALM Act.

Several of the people involved with the ATSC A/85 Recommended Practice responded to my April column about the CALM Act, and have shared more details about their thinking and intentions in regard to the practices covered by ATSC A/85.

Consequently, it seems appropriate to me that we go a little further with the discussion, simply to clarify what seems to be meant and desired in practice by A/85 and its authors.

The most important aspects of this have to do with what the law actually requires and also with the notion of LKFS:

This all merits some more detailed discussion.

To begin with, the CALM Act directs the FCC to "prescribe... regulation that is limited to incorporating... and making mandatory... the ''Recommended Practice: Techniques for Establishing and Maintaining Audio Loudness for Digital Television'' (A/85)... only insofar as such recommended practice concerns the transmission of commercial advertisements by a television broadcast station, cable operator, or other multichannel video programming distributor."

I personally believe loudness changes between channels will cease to be a problem when such recommended practices are implemented. This automatically happens when loudness actually equals the encoded dialnorm value for all ATSC AC-3 based channels.

In fact, the whole desired outcome of the CALM Act in its final form seems to be to get dialnorm to work as planned. That would be a very good thing.

It also needs to be noted here that LKFS is a proxy for the subjective quality of loudness. Although loudness and amplitude differ in profound and significant ways, it is the desire of the A/85 authors to simplify and clarify the maintenance of good loudness practices by the use of this proxy.

For this reason, they wish to establish a "loudness-as-LKFS" protocol that is independent from previous reference levels and amplitudes. They would like very much for traditional level meters (VU and PPM) to fall out of general use in television broadcasting, replaced by loudnessas-LKFS meters as well as true-peak meters (a part of this I haven't discussed).

This is a reasonable and good faith goal, particularly for a production environment (as opposed to a test-and-measurement environment).

We all also need to understand the distinction between "long form content" and "short form content," which I'm sorry to say I ignored in my April column.

In the case of "long form content" we measure the loudness of the Anchor Element, usually dialog, not whispered or shouted. And it is that average dialog level (only) that is the basis for the metadata value that gets encoded for the "long form content."

The implication of this is that short form content will never be louder than the dialog in the long form content. The reasoning behind this is that dialog loudness in programs is typically what listeners use to set their volume. If the loudness of spots matches program dialog, listeners will experience no need to reach for the remote at the commercial break.

In all cases, the operator needs to actually measure (emphasis mine) the loudness in LKFS, and that measured loudness needs to match the encoded dialnorm value in the transmitted AC-3 bitstream. If it doesn't, the resulting transmission is not in compliance with either A/85 or the CALM Act.

And here is where –24 LKFS comes in. In the instances where there is no metadata available with the delivered content and no other agreement about appropriate loudness, the ATSC recommends –24 LKFS as the target loudness. In my April column, I gave this priority over delivering metadata with the content, when in fact it appears to be the fallback position. Without a doubt, accurate metadata and measured loudness (or the equivalents) are vital.

WHAT DOES IT ALL MEAN?

It is my fervent hope that the presence of the CALM Act leads to widespread compliance with dialnorm protocols. This in turn, will result in much more stable and viable audio loudness in television broadcasting, both in terms of interstitials and between channels.

Dialnorm is based on the assumption that operators (stations, cable and satellite) will maintain a uniform and consistent loudness for their content as a matter of intuitive course.

When this is accomplished for all programs and interstitials on each channel and this loudness equals the transmitted dialnorm value, then all broadcasting should be, in a very reasonable way, at the same loudness. Let's hope!

A final comment: the ATSC Sub Group on Audio Loudness (the group who actually wrote A/85) has actually done a great piece of work here. They deserve our respect and thanks, and it is the fruits of their efforts that are what make the CALM Act viable. Thank you!

You can complain to Dave about anything at his website, moultonlabs.com.