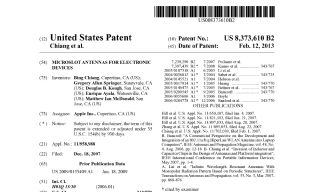 (I once explained how slot antennas work in my Feb. 1996 RF Column.) The simple explanation is that under Babinet's Principle, a slot in a metal sheet can be considered the electromagnetic opposite of the piece of metal removed to make the slot.

It’s difficult to get RF into or out of tablets with conventional metal cases without making part of the case from some type of RF-transparent material. As the number of frequency bands these devices have to cover increases—I hope that at some point FM and TV bands will be included—the idea of potentially using the entire case for antennas is attractive.

It seems obvious after reading the patent, originally applied for more than five years ago, that slots in the metal case of a tablet or phone could be used as an antenna. The patent includes enough drawings to allow an RF hobbyist to construct his or her own case antenna with the right tools. There’s even an SWR plot showing how multiple slots can be combined to widen the bandwidth. Slots can be made very thin (just as a dipole can be made out of wire) and filled with a dielectric material.

I see one potential problem with using slots in the case of a wireless device as an antenna, and that is the ability for a user’s hands, or metal objects, such as a protective case or mount, to detune the antenna. Of course, that’s likely to be a problem with any antenna in a handheld device.