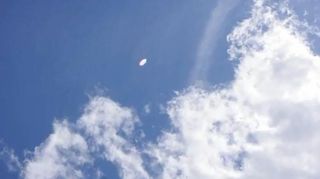 LONDON: An alleged UFO flyover of a BBC building in London was captured on video Friday, according to reports out of the city. A two-minute YouTube video has local media buzzing. It shows several bright lights flitting in and out of the clouds. At about a minute in, the shooter zooms in on what appears to be the iconic disk-shaped object that hovers for a few seconds and zips back behind the clouds. It was posted by a 31-year-old user from the United Kingdom, alymc01, who’s had some 381,000 hits so far on the clip.

The comments are mostly declarations of legit versus fake versus a promo for the next “Men in Black” installment. The video was said to be shot Friday, 64 years after Kenneth Arnold reported strange objects in the sky near Mount Rainier in Washington, Space.com says:

Arnold's sighting was “such a sensation that it made front page news across the nation,” UFO-logist and author Martin Kottmeyer wrote in REALL News in 1993. “Soon everyone was looking for these new aircraft which according to the papers were saucer-like in shape. Within weeks hundreds of reports of these flying saucers were made across the nation. While people presumably thought they were seeing the same things that Kenneth Arnold saw, there was a major irony that nobody at the time realized. Kenneth Arnold hadn't reported seeing flying saucers.”

The date also represents the 14-year anniversary of a U.S.A.F. report on the Roswell, N.M. sightings in which the bodies of aliens were supposedly recovered. The report said the bodies were actually crash dummies. It was June of 1947 that a rancher in New Mexico came upon “a large area of bright wreckage made up on rubber strips, tinfoil, a rather tough paper and sticks,” according to TheRoswell Files. He thought little of it until hearing the reports about Arnold’s sighting.

Reports of UFO sightings coinciding with the Arnold anniversary are cropping up in the United States as well, according to Roger Marsh. Marsh writes about UFOs for Examiner.com. He’s written about recent sightings above Kansas and Illinois.

Check out the YouTube video and see what you think: