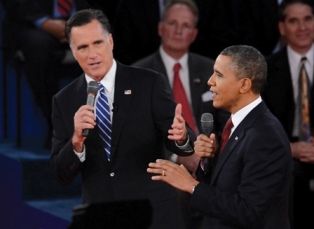 HEMPSTEAD, N.Y.— On Sept. 23, 1976, just as the first of a series of debates between President Gerald Ford and opponent Gov. Jimmy Carter had gotten underway in Philadelphia, the sound system in the Walnut Street Theater went dead. The image of two men who were vying for the role of leader of the free world standing mutely on a stage for the 27 minutes it took to get the sound system restored was burned into the collective memory of what would become the Commission on Presidential Debates, which formally took over the Presidential debate process in 1987, in time for the Bush-Dukakis debates in 1988.

The Commission continued to retain Larry Estrin as its audio director. Estrin, who had been called in at the last minute by CBS to handle the audio for the second Ford-Carter debate after the debacle of the first, which was broadcast on ABC, recalls, “They told me, ‘Do whatever it takes. It just can’t fail.’”

Validating the inverse of Murphy’s Law, none of these backup microphones have ever been needed, but Estrin would never think of going to air with anything less. This kind of layered redundancy is foundational, he says: “It’s what gives everyone the confidence to move forward, because in the debates, if you lose video, you’re at least left with the equivalent of radio; if you lose audio, you have nothing.”

LOUDNESS COMPLIANT
One of the things that set the broadcast audio apart was that the broadcast air mix was taken directly from the venues’ live-sound FOH (front of house) console. At each of the debates, live sound mixer Michael Abbott mixed through a pair of Yamaha DM2000 digital consoles to both the house PA and the broadcast pool truck, which was provided by ABC in Denver and Fox on Long Island. There was also a redundant mix position: an analog Midas Venue console backstage manned by communications manager Peter Erskine, who was also monitoring the four Tempest 2400 wireless base stations that were the foundation for the Clear-Com 2.4-GHz intercom system.

The Denver broadcast was straightforward: Abbott mixed the two stationary candidate microphones and the moderator’s lavaliere mic from a conventional FOH position in the middle of the ice rink-turned auditorium. At Hofstra however, the debates were town-hall style, involving 84 participants seated onstage and divided into six audio zones, sharing 24 Audio-Technica AE6100 wired handheld microphones. These were routed to Dugan MY 16 automixing cards installed in the Yamaha consoles and rackmounted A-T MX351a Smartmixers, which were routed from the DM2K to the six zones via six mix-aux busses.

Managing the candidates’ audio was complicated. Informed viewers knew it was essentially a return bout between Obama and Romney after the President’s lackluster Denver performance. “We were expecting fire, and we got some,” says Abbott.

At both debates, Commission on Presidential Debates Communications Manager Peter Erskine manned an analog Midas Venue console backstage and also monitored four Tempest 2400 wireless base stations that were the foundation for the Clear-Com 2.4 GHz intercom system.
This is the first debate cycle since the ITUR BS.1770 protocol was implemented, which specifies that average loudness must equal the dialnorm metadata value that is transmitted, with an agreed-upon value for spoken dialog of –24 LKFS. That specification provided a target that Abbott tried to keep to as exchanges between the candidates and, in a couple of instances, the moderator, as well, grew sharper and louder. To Abbott’s left a Linear Acoustic LQ-1000 loudness monitoring system kept a running tally of current loudness alongside the target loudness value, as well as dialnorm and peak levels. A bar-graph display also recorded loudness over three time periods along with a histogram display that charted peak levels over a running 40-minute timeline. Abbott says his mix was a combination of watching the loudness data and trying to balance the candidates from his perch above the stage-right participant seating.

“The moderator’s level was the fulcrum that I tried to balance the two candidates’ level around—you can’t favor one or the other, but rather try to have the audio follow the story line,” explains Abbott, who says his experience mixing vocal-heavy entertainment shows including “The Voice” and “X Factor” helps considerably, subtly pulling a fader back ever so slightly when a candidate’s intensity rises as their response to a question or a challenge transits from evenly calculated to rawly emotional. “You can’t just pull them down when it gets heated or let it overmodulate—we were hitting a –19 dialnorm during heated moments. The goal was just to keep it compliant at a –24 dialnorm value.”

There were a lot of nuanced clues to watch for. For instance, in response to a comment by Gov. Romney, President Obama began to speak before he raised his handheld microphone from his lap. Abbott instinctively moved the fader on one of the President’s wireless lavs upward, but as the President drew his handheld closer to his mouth, the audio experienced a brief moment of comb filtering as the lav fader was pulled out of the mix.

The debate shared another challenge with the network vocal competitions—Abbott says in neither case was he able to get a useful soundcheck. “With the candidates, it’s ‘check one, two’ and they’re out; with the shows, the stars aren’t there for soundchecks—it’s a stand-in,” he says. “But the experience I get from them is invaluable when it comes to projects like the debates.”

And one other network reality show Abbott mixes also helped prepare him for the debates—the appropriately titled “Survivor.”