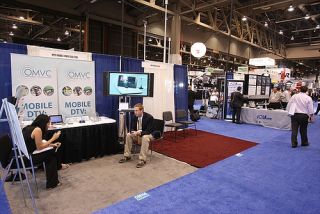 WASHINGTON: The coalition supporting mobile digital television launched a proxy defense of broadcast spectrum today in the wake of the FCC’s move to reclaim it. The Open Mobile Video Coalition held a press conference ballyhooing the benefits of mobile DTV with a white paper it commissioned from IDC. OMVC chief Brandon Burgess said the event was not a response to the National Broadband Plan released by the FCC two days ago. However, he emphasized the spectrum efficiency of mobile DTV versus video delivery via data networks.

Mobile DTV, he said, is the “only one-to-many delivery system that doesn’t clog other types of data networks with video. We don’t have to bog down any Internet pipes. Our system is designed to enable fast, robust reception both in the home and outside the home... There is no cellular system that’s been explained to me that can carry the amount of video that needs to be carried.”

The FCC’s National Broadband Plan calls for taking 120 MHz of broadcast TV spectrum and giving it to wireless providers. The plan outlines a structure by which broadcasters can give up spectrum voluntarily in return for auction proceeds. Harry Jessell at TVNewsCheck notes, however, that the fine print indicates a more aggressive approach of shoving broadcasters into fewer channels whether or not they volunteer.

The FCC reasons that not all broadcasters are using the 19.4 Mbps pipe each is assigned in a 6 MHz broadcast license. Some are multicasting--a total of 1,400 multicast channels have been launched,” or fewer than one per station on average,” the NBP states. “The revenue generated by such services has been modest thus far and is forecast to remain so in the near term--0.9 percent of revenue for broadcast TV stations in 2010, projected to rise to 1.5 percent of revenue in 2011.”

CBS in particular is using its bits for HD, which the FCC figures can be done in a 6 to 17 Mbps payload. It doesn’t project a bitrate for mobile, but the plan does note the following about mobile DTV:

“As of July 2009, approximately 70 broadcast stations serving 28 markets had announced plans to begin mobile broadcasting through the Open Mobile Video Coalition. The business model for mobile DTV is uncertain, with forecasts and comparisons to domestic and international examples representing varying points of view. Many entities are pursuing the delivery of television content to mobile devices, but the method of delivery that will be favored by consumers and be successful in the market has yet to be determined.”

“...how robust you want it and how many mobile bits you want to send. The FCC requires the broadcaster to carry at least one non-mobile SD video service. So, if you figure the effective total channel payload is about 18 Mbps and you reserve, say, 3 Mbps for that FCC-required SD channel, that leave you with about 15 Mbps to play with. In highly robust mode, there’s about a 4:1 relationship to the mobile-payload bits, so you could transmit about 3.5 Mbps or so. In less-robust mode, it’s about a 2:1 relationship, so you could do about 7 Mbps. Of course, if the non-mobile service is doing HD at even just 12 Mbps, that would leave only 6 Mbps, or maybe a little over 1 Mbps of mobile payload in highly robust mode and maybe 2.5 in less-robust mode.”

The FCC proposal for two broadcasters to share a single 6 MHz swath of spectrum would leave each with 9.7 Mbps--enough for one low-quality HD signal each, a combination of SD signals and/or a mobile signal with somewhat limited quality and reach.

The standard for transmitting mobile DTV--ATSC M/H--was just finalized last fall. Receivers were just introduced at the Consumer Electronics Show in January. Broadcasters are just now getting transmitter configurations up and running.

Colleen Brown of Fisher Communications said her company’s stations have been testing ATSC M/H for the last five months.

“We believe it’s critical that broadcasters maintain the spectrum to develop things like mobile DTV,” she said. “It is appropriate that broadcasters and consumers have a chance to see these technologies developed.”

The OMVC says ATSC M/H has been tested in trains moving more than 150 miles per hour. It says 45 U.S. TV stations are now sending out ATSC M/H signals; 100 are expected to be doing so at year’s end.

“We started three years ago, before spectrum swapping was on anyone’s agenda,” said Burgess, who also heads ION Media, which has more than 60 TV stations. When asked about broadcast owners considering the swap, Burgess said he couldn’t speak for coalition members.

“If people have alternate plans for spectrum, I certainly don’t see it,” he said. “We’re owned by investors. I certainly haven’t been asked by my company to do anything different.” -- Deborah D. McAdams