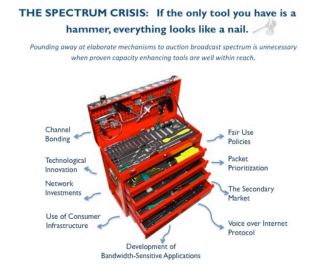 WASHINGTON: The looming spectrum crisis is manufactured, according to a former Federal Communications Commission official. In a study commissioned by the National Association of Broadcasters, Uzoma Onyeije says the “spectrum crisis is factually revisionist.”

“Wireless carriers do not suffer from a nationwide ‘spectrum crisis;’ they face a capacity crunch in a limited number of locations. And there are a variety of tools at carriers’ disposal for addressing capacity concerns. However, policymakers have not adequately explored these tools,” Onyeije writes.

He notes AT&T and Verizon’s migration to fourth-generation LTE, said to be twice as spectrally efficient as current third-generation wireless networks.

He also points out that voice calls could be more efficiently handled as packet-based Internet Protocol rather than circuit-switched traffic. Offloading mobile Internet traffic to Wi-Fi fixed locations is also expected to rise, and therefore increase capacity. Onyeije quotes American Tower Corp. chief James Taiclet as saying the company’s 38,000 tower sites are at about 50 percent capacity.

“AT&T and other wireless operators could double the amount of capacity they supply with current spectrum by investing more in new wireless equipment on existing cell towers,” Taiclet is quoted as saying.

Onyeije, former broadband legal advisor at the FCC Wireless Telecommunications Bureau, debunked the existence of the spectrum crisis now being used to justify the reallocation of 40 percent of the broadcast spectrum for broadband.

“In the final analysis, the impending spectrum crisis is not real,” he said. “In fact, it includes all the elements of a bestselling science-fiction novel. First, the story seamlessly merges reality and fantasy. Second, the tale includes dire predictions about the future if, and only if, the worst-case scenario were to happen concerning a long list of variables. Third, the account ignores all simple solutions in favor of a dramatic conclusion.

“And, of course, there is a manufactured enemy. In this case, many seem to indirectly and incorrectly believe that free over-the-air broadcasting is the enemy of mobile broadband. But this debate masks the fact that there are other spectrum resources available and that carriers and the FCC have meaningful alternatives to manage the increased demand for data services.”
~ Deborah D. McAdams

Susan Polyakova of the Wireless Communications Association International replies: “The latest spectrum paper by Onyeije Consulting submitted by broadcasters to the FCC proposes alternatives to incentive auctions but doesn’t provide any technical or economic analysis demonstrating that these alternatives would actually work. The paper also ignores the fact that the best alternative to solve the spectrum crisis is to make more spectrum available, and broadcasters are sitting on an enormous amount of the best spectrum for mobile broadband.”