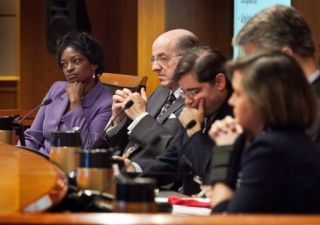 That plan calls for the reassignment of 40 percent of TV broadcast spectrum for wireless broadband. Genachowski did not address how the white-space order could complicate that reassignment for TV stations that would have to change channels.

He instead focused on how allowing unlicensed devices to operate in TV white spaces would incite innovation. It is the first significant release of unlicensed spectrum in 25 years, he said. (And the first ever in the TV band.)

“We know from experience that unlicensed spectrum can trigger unexpected but hugely beneficial innovation,” Genachowski said in his prepared remarks. “For example, years ago, there was a band of low-quality spectrum that was lying fallow. Nobody could figure out what to do with this so-called ‘junk band,’ so the FCC decided to free it up as unlicensed spectrum.

“The result was a wave of new technologies--baby monitors, cordless phones and eventually a real game changer: Wi-Fi. Today, Wi-Fi is a multi-billion [dollar] industry and an essential part of the mobile ecosystem.”

Commissioner Michael Copps commented on the allowance for wireless mics and said the commission went “to great lengths to accommodate their needs.” The pecking order and channel structure created for wireless mics will ensure adequate spectrum for them as well as “encourage... manufacturers to make much-needed improvements to equipment efficiency and interference resistance.”

Commissioner Robert McDowell said that even though the spectrum-sensing requirement was eliminated, he expected the development of the technology to continue. “Sensing holds great promise to improve spectral efficiency and provide ‘smart’ access to other bands,” he said.

McDowell also noted the necessity of selecting the white space database managers tout de suite. “Certainly it is important that we proceed to this next step as quickly as possible, which will bring greater certainty to the entities that tell us they are standing ready to build the technologies for this spectrum band.Given that we have eliminated the sensing requirement, however, it will be just as important to proceed with great care.”

McDowell mentioned the need to address backhaul down the road. More backhaul capacity will be needed as communications devices proliferate. He said commission staff would evaluate the use of white spaces in rural areas and submit a recommendation by the end of the year.

Commissioner Mignon Clyburn commended the staff for adding Mexican and Canadian TV stations to the database.

Commissioner Meredith Baker said there were three areas in the order where she hoped to take additional action in the “near future.” One is the establishment of the geo-location database managers. The second involves how to encourage further development of spectrum sensing. Baker’s third area of concern involved backhaul.

“The ability of both new and incumbent wireless providers to provide 4G wireless services ubiquitously is dependent upon arobust wireless infrastructure that is too often lacking in rural areas,” she said. “The prospect of fixed licensed backhaul in the TV bands holds great merit and I would hope that we could move forward along the lines that have been proposed as soon as we have completed our official analysis of TV spectrum availability.”