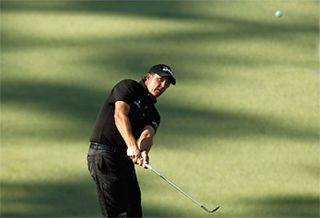 AUGUSTA, GA.—As the 2011 PGA season gets underway, broadcasters and cable networks are gearing up for coverage that spans the technology landscape from 3D to slo-mo.

Phil Mickelson chips to the 10th green during fi nal round play in the 2010 Masters. Photo by Reuters/Shaun Best/Landov The Masters Tournament at Augusta National Golf Club will once again feature 3D coverage. But the collaborative effort between CBS Sports and ESPN has evolved from last year's coverage of a few holes for Masters.com and 3D-equipped Comcast subscribers to a full-blown world feed this year.

At press time, international rights to the 3D feed were inked with Canada, the United Kingdom/Ireland, Germany and Spain, and deals were being pursued for other markets throughout Europe and Asia, according to Steve Ethun, Director of Communications for the Augusta National Golf Club.

BSkyB clinched the rights to the U.K. and Ireland markets. Spokesman Julian Sheldon estimated the home audience at 76,000 Sky 3D subscribers, plus potentially hundreds of thousands of viewers who will be watching in pubs.

"It is our hope that through this technology, we will further enhance the brilliance of our historical television production so capably presented by our broadcast partners, CBS and ESPN, and importantly supported around the world by our global sponsors," said Billy Payne, Chairman of Augusta National Golf Club and the Masters Tournament

CBS is the producer of record for both 3D telecasts. NEP is supplying its Super Shooter 32 mobile production unit, which has been contracted for ESPN productions. Plans are to use the Panasonic AG-3DA1 fully-integrated Full HD 3D solid-state camcorder for the ENG (standups, scenic) shots.

"Six of the cameras are actually shadow cameras, like [the ones] we used at the US Open Tennis [tournament]," said Ken Aagaard, CBS Sports executive vice president of operations and engineering. "They'll be attached to 2D cameras and operated by a 2D camera operator. The 3D lenses, which are attached to the side of the 2D lens, will go along with whatever the 2D operator does (zooms, pans, tilts)."

CBS’s “Shadow 3D” setup, first deployed at the 2010 US Open Tennis Championship, will allow the network to shoot 3D and 2D from the same location.2D AND 3D

Aagaard planned to have an 80-person 3D crew. He estimated that there would be about 17 systems for the shadow, crane, robotic, handheld and hard cameras used for the 3D coverage, versus the eight used last year. Some systems will be shared with the 2D production—for example, the shadow rig and two jibs. One of these jibs will be at the 12th hole, aimed to cover the tournament's signature shot of golfers crossing Hogan Bridge.

Of course, that number pales in comparison to the 2D coverage, which would use a substantially larger crew. Some of the 2D cameras would also supplement the footage captured by the 3D cameras.

"If for whatever reason we don't have a 3D camera in the right place, we can cut in a 2D camera," said Aagaard. "You bring the 2D feed in and re-insert it in the Sony [MVS8000X] switcher in the NEP truck so that there's a left eye, right eye from that camera. You're watching it in 3D even though it may not be an actual 3D camera."

The biggest added attraction of 3D to the broadcast coverage is its take on the elevation and break in the green, he said.

"The jibs give you a great feeling because you can look up over the bunker and then see the green in 3D—those are really spectacular shots," said Aagaard. "Something that we've been striving for is to show different elevations on a green."

He also noted that his crew plans to shoot 3D aerials from a helicopter, weather permitting.

"We're going to shoot both 3D and 2D simultaneously (hole descriptions used in playback) to show the holes from above," said Aagaard.