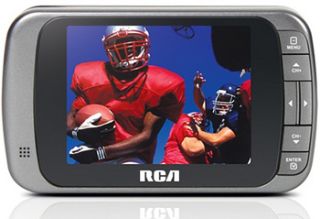 Last week I mentioned that I'd ordered one of the new RCA Mobile DTV receivers from RCAPortableTV.com. When I arrived in Los Angeles from the NAB Show, my DMT335R was waiting for me. I had a chance to work with it over the weekend and see how it compared with other ATSC and ATSC MH receivers.

CAPTRCA DMT355R Hybrid Portable TVION ATSC reception was as good as, or better, than that of any ATSC portable receiver I've tested, even though the antenna was shorter. As with all receivers using a monopole antenna, it worked much better with a ground plane--either in my hand or a sitting on a metal object.

I did a scan of Los Angeles channels, with most of the full power stations being received, but none of the low-power operations. Even KLCS, one of the lowest powered full-service stations on Mount Wilson, came in fine. I was very happy to see that the receiver—with its small whip antenna--found that one, and also could receive all four Los Angeles full-power DTV stations operating on VHF frequencies--channels 7, 9, 11 and 13.

The RCA receiver has a signal meter that works in both ATSC and ATSC Mobile DTV modes. It's handy for optimizing antenna position and length. I found that reception was possible if the indicator was anywhere in the yellow or green areas. As expected, orientation and positioning were more critical with conventional ATSC reception than with Mobile DTV, but I don't see non-technical viewers having a problem if they use the signal indicator display. It's available by pressing the "OK" button in the center of a set of four navigation buttons. The other controls are for volume and channel selection.

Unlike the handheld ATSC receivers without Mobile DTV capability that I've tested, this one includes a full EPG, as well as closed captioning. Aspect ratio can be set automatically or manually. Unfortunately the DMT335R has a 4:3 ratio display, so it goes to letterbox mode when viewing content in the ATSC A/153 16:9 standard format, unless it's set to 4:3 for a center cut. Zoom options in the menu make it possible to fill the screen regardless of content.

ATSC Mobile DTV channels have to be scanned and tuned separately. The modes are selected using the "Menu" button. I didn't find any VHF Mobile DTV channels on the air in Los Angeles, but had no problem locating the four UHF channels carrying Mobile DTV programs. After switching between Mobile DTV channels, I was surprised to see a "weak signal" message displayed when tuning to channels found in the scan. These were the ones that came in perfectly using the conventional ATSC tuner. There appears to be a bug in the receiver—I can't say if it affects all units—causing the receiver to fail to recognize Mobile DTV signals under many conditions. If any readers have these receivers, I'd be interested in hearing your comments.

I found a simple solution. If the mobile signal doesn't appear, then turn the receiver off, and then back on again. This will cause the Mobile DTV signal to lock up soon after power on. It doesn't take long. This does not appear to be signal level-related—stations showed "green" on the signal level menu after the power cycle. Nor does it appear to be related to the type of Mobile DTV transmission equipment the station is using. (The problem appeared on stations using Harris exciters/multiplexers, as well as those using the Rohde and Schwarz system).

Once the UHF DTV mobile signal was recovered by power cycling, it was rock stable. In the middle of a building in Burbank, far from any outside windows, the KNBC mobile signal never dropped out, even if the antenna was partially retracted and the receiver moved through different orientations.

Tuning issues aside, the RCA Mobile DTV sensitivity appears to be on par with, or perhaps a bit better, than the prototype Samsung Moment handset I've been using. As RCA includes conventional ATSC reception as well as Mobile DTV, the receiver will probably replace the Moment handset in my travel kit, even though it's a bit wider and about twice as thick (and if I can find room for yet another charger. The Moment was convenient as it uses the same charger as my Samsung wireless LTE hotspot and my Motorola Bluetooth earset.) With the RCA's strong performance on VHF ATSC, I suspect it will do better than the Moment on VHF Mobile DTV.

On an unrelated receiver topic, I discovered that the Samsung LTE (700 MHz) hotspot appeared to create interference to indoor conventional ATSC reception on Channel 48 when using my favorite USB DTV tuner, the Pinnacle (now the PCTV Model 801e "Pro stick"). The good news is that the prototype Hauppauge Aero-M tuner (which also provides Mobile DTV reception) had no interference problems.

Another of my other favorites, the Artec T19AD also performed well. The Hauppauge HVR950Q appeared to handle the 700 MHz interference better than the PCTV, but I did observe some hits. The Hauppauge Aero-M looks like a good tuner for conventional ATSC as well as Mobile DTV. I'll have more information this after testing it in more locations. Unfortunately, neither the Artec T19AD nor the Hauppauge Aero-M is supported in the current Linux kernel (2.6.38) libraries.