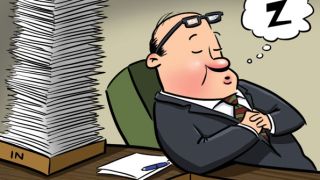 Ronald Reagan once said, “... government does nothing as well, or as economically, as the private sector in the economy.”

Yet, it appears we are about to witness the next example of overreach and mismanagement by government bureaucrats — all under the pretext of solving the so-called spectrum crisis. In this instance, government’s solution comes from a blue-ribbon committee’s proposed new way to manage spectrum.

The committee, code-named PCAST (which in government-ese stands for the President’s Council of Advisors on Science and Technology), has invented a new way to solve what some politicians and the CEA are calling a national spectrum crisis.

While PCAST specifically addressed only federal spectrum, hear me out because, if this weed gets rooted, broadcasters beware. The bottom line is that instead of auctioning federal spectrum to the private sector, PCAST suggests that everyone should just learn to share.

“Clearing and reallocation of Federal spectrum is not a sustainable basis for spectrum policy due to the high cost, lengthy time to implement and disruption to the Federal mission,” PCAST says. “Further, although some have proclaimed that clearing and reallocation will result in significant net revenue to the government, we do not anticipate that will be the case ... This study finds that today’s apparent shortage of spectrum is in fact an illusion brought about because of the way spectrum is managed.”

This consortium of brain cells determined that instead of holding auctions and letting winning private companies manage their spectrum economically, government should just make everyone share those frequencies.

Of course, a key part to any good bureaucracy is the formation of more government, and this committee is no exception. In order for all of this sharing to happen, we need a committee. In fact, we need a whole bunch of new committees and agencies and people to staff them.

PCAST suggests several new White House offices and systems. The plan envisions a Federal Spectrum Access System (SAS), which becomes the spectrum clearing house. In addition to that would be the creation of a Spectrum Sharing Partnership Steering Committee (SSP). Then, as PCAST explains, we need “... increased White House involvement. Specifically, we recommend that the White House Chief Technology Officer (CTO), with equivalent level representatives from the National Security Staff (NSS), the Office of Management and Budget (OMB), and National Economic Council (NEC) formalize a Spectrum Management Team (SMT) to work with the NTIA to carry out the President’s directive.”

If the logistics of that aren’t enough to hurt your head, then consider costs must be covered. Not a problem, says PCAST.

“The existing Spectrum Relocation Fund should be redefined as a revolving (in taxpayer terms, this means a never-ending cost) “Spectrum Efficiency Fund” that recycles private sector payments (that means business fees) for use of Federal spectrum into reimbursements to Federal agencies for investments that facilitate spectrum sharing and enhance spectrum efficiency,” PCAST says. “Congress should allow the Fund to reimburse qualifying costs by any Federal service, not just those in revenue-generating bands.”

Lest you think this model could not be adapted to broadcast spectrum, see page 93 of the report. There, you’ll find a “Spectrum Efficiency” formula. PCAST has resolved the entire spectrum crisis into a single formula that measures “spectrum utilization.”

I could go on, but you get the idea. Any problem of any scale can be solved by the creation of sufficient committees staffed by ample numbers of bureaucrats and funded through a never-ending assortment of public and private sector taxes, fees and assessments. The entire proposal can be read at: http://www.whitehouse.gov/sites/default/files/microsites/ostp/pcast_spectrum_report_final_july_20_2012.pdf.