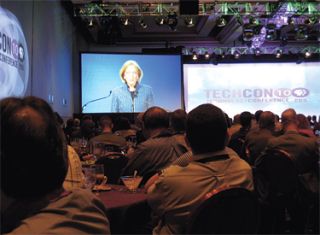 LAS VEGAS—Reminiscent of a Masterpiece Theatre opener, 2011 may be “the best of times; the worst of times” for public broadcasters. As fiscal conservatives sharpen the blade and roll the budget guillotine into Big Bird’s neighborhood, PBS technology and operations managers gather for their annual pre-NAB Technical Conference (TechCon), April 6-8 at the MGM Grand here. Scheduled long before the current brouhaha, attendees will share do more with less strategies and charge “full-stream ahead” into non-realtime program distribution.

John McCoskey, PBS Chief Technical Officer For the PBS community, with some 350 independent member stations serving all 50 states, Puerto Rico, U.S. Virgin Islands, Guam and American Samoa, “There’s not a more important time for this gathering,” says PBS Chief Technical Officer John Mc- Coskey. “Collaborating, learning about successes and challenges of other stations and having focused communication with key suppliers helps our members deal more effectively with their limited resources... we offer tutorials and best practices, new technologies and case studies to address both the common and unique technical complexities our stations face.”

They must be doing something right, early registration numbers are tracking ahead of last year’s well attended conference.

Responding to rising budget and political pressures, McCoskey cites recent polls that show PBS and its local member stations are highly trusted by the public and considered an excellent taxpayer value. “Our focus is to continue working closely with member stations, other national public broadcasting organizations and the millions who support public television to make our case,” he said. “Station technologists are a very forward-thinking group; they’re not thinking about survival as much as adapting their strategies to find efficiencies, maximize grant opportunities and meet their missions within resource realities.” Towards that end, PBS is making significant progress toward automating their distribution infrastructure for traditional broadcast, as well as for its growing online and mobile services.

NGIS (Next Generation Interconnection System)—a 10-year phased project to streamline content delivery, sharing and workflow has been in the TechCon spotlight since its 2005 inception. “There was a major focus on non-real-time [NRT] file distribution last year, as we were in active development,” McCoskey said. “This year it’s mainstream, with multiple stations actively testing. We’ve integrated NRT into the PBS workflow and are doing a staged roll-out across the system,. Deployment will be centrally funded through a grant from CPB.

PBS President Paula Kerger addresses TechCon 2010. “We have 16 alpha sites testing the system and workflows to identify gaps and unknowns... some are taking programs to air, others operating in parallel,” said Jerry Butler, senior director of the PBS Interconnection Replacement Office. “Only 75 to 80-percent of our content will be distributed via NRT; live and near-live programming will continue in real time.” NRT is intended to reduce PBS’s reliance on, and more efficiently utilize, costly transponder time, but “because of public TV’s large geographic footprint, satellite will be used for the foreseeable future,” Butler concludes.

Alan Popkin, director of television engineering for Los Angeles-based KLCS and a long-time NRT proponent, is an alpha tester. “As with any new technology, we’ve had some initial successes and some setbacks; each facility’s workflow is different,” he said. “Everyone’s working diligently to resolve issues and move ahead—the important thing is we’re taking files to air!”

RadiantGrid’s faster-than-realtime TrueGrid transcoding software was tapped to handle the 40-plus hours of daily programming PBS expects to transmit when NRT is fully operational. Already used at the their Media Operations Center, RadiantGrid assures format compatibility that enables each station to make use of the program files delivered to them—with closed captions, an important consideration for PBS.

Alan Popkin of KLCS explains the NRT Station Services Platform at TechCon 2010. Elemental Technologies, a recently announced addition to the NRT mix, was chosen by RadiantGrid to leverage their transcoding solution, using its massively parallel video processing hardware to perform the “heavy lifting” of encoding, dramatically accelerating video file conversions, including from H.264 to the MPEG-2 format.

In addition to NGIS/NRT updates, attendees can browse a “mini-NAB” of PBSfriendly vendor exhibits or attend the broad range of informative sessions, including a strong IT track covering subjects like “Deploying Windows 7 and Next Generation Member Management Systems.” Other tracks include “Best Practices for Using DSLRs in Video Production” and the “Nuts & Bolts of Transcoding.”

“Among our hotter topics is Peer-to-Peer Video File Exchange—a significant savings in shipping costs when stations send each other files instead of tapes,” notes McCoskey. For the environmentally conscientious, there’s a session on building green broadcast facilities focusing on the recently completed “Vegas PBS” (WLVX) as an example.

It’s difficult to imagine a world without Sesame Street’s kid-friendly, educational characters, “PBS News Hour,” the “Antique Road Show,” “Nova,” or the occasional dose of stiff-upper-lip BBC comedy. No doubt PBS has a fight on their hands and some noses will be bloodied before it’s over. However, on the technology side at least, Big Bird’s house seems in order and perhaps even a step or two ahead of the budget hawks. Welcome back to Las Vegas!