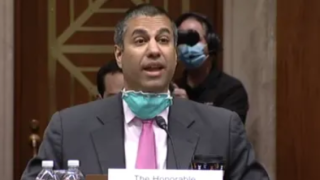 WASHINGTON—FCC chair Ajit Pai got some tough, but not surprising, grilling on the C-Band auction at a Senate Appropriations Committee subcommittee hearing Tuesday (June 16).

He testified in person, sporting a mask (see above) though not wearing it while testifying.

Leading the charge was Financial Services and General Government chairman Sen. John Kennedy (R-La.), one of the harshest critics of the FCC decision to give satellite companies close to $10 billion in incentive payments to exit the spectrum by 2021 and 2023 instead of the 2025 deadline the FCC set.

Kennedy pressed Pai on why the FCC did not just use its authority to mandate they get off in 2021, particularly since it was already giving those operators over $4 billion in relocation costs, whenever they exit.

Pai said that exiting early meant the spectrum would be more valuable for wireless companies eager to get their hands on it for 5G, and so it would draw a higher price at auction, and more money for the treasury, than if the wireless operators did not clear off until 2025.

Kennedy did not seem assuaged, returning again and again to the point that the FCC could have just mandated they exit by 2021 and kept that $10 billion for building out rural broadband.

Kennedy asked Pai whether the FCC had the authority to mandate that exit. Pai did not provide an answer and Kennedy shot back that as a good lawyer Pai knew the answer was yes.

Pai got some help from ranking subcommittee member Sen. Chris Coons (D-Del.), who pointed out that the money going to the treasury could go to rural broadband if Congress decided it should go there, and Pai agreed, saying he supports that.

Coons asked if the satellite companies had agreed not to sue the FCC over the auction as part of the deal to exit early. Pai said no, that was not a condition of the payments.

Coons said maybe he had missed something but that threat of legal action was the critical issue: "We're going to pay you billions of dollars, you're not going to sue, and you're going to move."

Pai said the smaller satellite companies had filed for review, but that that was always going to happen and their case was week. He said that the incentive payments had "dramatically reduced" the risk of lawsuits by the larger carriers.

Coons said the best argument Pai had for the payments was that it was going to make the potentially auction-delaying lawsuits go away.

Pai said that incentivizing the carriers to exit spectrum early has three key public benefits: 1) 5G services years before they otherwise would, including services such as telehealth and remote learning that have become so important during the pandemic; 2) American leadership in 5G (Pai cited a story he had tweeted this week about China spending $1.4 trillion to "seize the mantle of 5G leadership; 3) a thriving innovation economy--"talent is fickle, capital is fickle," he said.