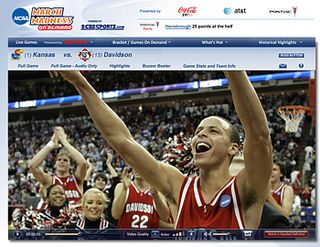 A new Asian broadcast deal, Web content syndication, wireless and online initiatives (including HD streaming), along with an expected record attendance for the Final Four at Detroit's Ford Field football stadium all contribute to the event's continuing popularity.

March Madness officially tips off with "Selection Sunday," March 15. ESPN will broadcast the "Play in Game" between the 64th and 65th contenders, March 17. CBS will take over the Big Dance, from Round One (March 19-20) through the National Championship on April 6.

The NCAA's deal with the newly formed Hong Kong-based All Sports Network pay-TV service could add an additional 225-250 million viewers in Asia. Xinhua Sports will provide the telecast in China.

"[ASN will] probably take about 25 games total, one for each of the potential windows; we deliver about 27 games on a multilateral basis," said Rich Lefler, principle, R&S Consulting, the seven year-old New York-based media consultancy that brokered the deal. "The pan-regional footprint for that many games is new."

A record number of fans is expected to attend the Final Four the weekend of April 4-6, according to the NCAA.

The 2 million-square-foot Ford Field hosts an average 65,000 NFL fans during Detroit Lions' games. According to Bob Gardner, senior director, facility management, unlike other stadiums, basketball games held in Ford Field are not half-stadium events; they're "50-yard line configurations," he said.

Specially built risers and bleachers such as those found in Ford Field accommodate even larger crowds for college basketball.

"The NCAA's riser system for the 2008 regionals went up and over our walls [by] 12 rows. We're going up 21 rows for the Final Four," said Gardner. "They've extended that rise of three to four inches [between rows for NFL games] to eight or nine in some circumstances."

"We [use] robotic cameras that are set on the floor level at the free throw line, which shows the free throws and gives you a feeling for the crowd in the background," said Ken Aagaard, executive vice president, operations and production services, CBS Sports. "The raised floor [would] expose them."

At press time, CBS was working on alternative sight lines, a new FlyCam package and virtual graphics application, as well as a new approach to accommodate the talent.

"We have to put our announcers at courtside on a platform so that we can get them at least half-way up, otherwise they'd be looking at everyone's sneakers; but you don't want to block too many seats," Aagaard said.

The 50-yard line configuration also presented challenges for broadcast, (half court setups cede half the area for basketball, the other half for media).

The stadium planned to convert 20,000 square feet of basement storage into a media hospitality area with interview rooms, according to Gardner, necessitating the installation of telecommunications, air conditioning, power, lighting and other accoutrements.

"That's just part of it," he emphasized. "We have to make network compounds on the outside of the building—and get the cabling from the outside areas around the perimeter back to the building."

Ford Field in Detroit, which hosted the 2008 NCAA Men's Midwest playoffs, will be the site of the Final Four this year.NEW MEDIA

Online streaming of the NCAA playoffs has become extremely popular since CBS launched "March Madness on Demand" in 2003.

Last year, MMOD started showing all 63 games—from the first round of the tournament through the semifinal and final games of the Men's Final Four—making it the only major sporting event broadcast live and in its entirety for free on the Internet. According to CBS, approximately 4.8 million users logged onto MMOD in 2008, garnering $23 million in ad revenue.

This year, CBS will offer its first ever live, high-quality stream of a major sporting event by adding the option of HD online via Microsoft's Silverlight. The player will stream the enhanced hi-def content at up to 1.5 Mbps; an SD player will serve up the action at about 550 kbps. Both will be offered free of charge beginning March 19.

"It's pretty turnkey—it's literally a snippet of code that they can put on their [Web] sites [that will] drive people in," said Kint of the application. "We've made it even simpler this year, so they have the ability to link straight into specific games if they want, rather than in through the front door."