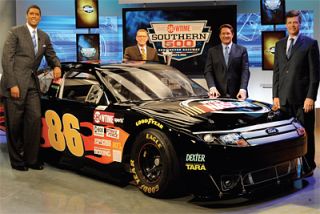 CHARLOTTE, N.C.
When NASCAR offers its July 3 Sprint Cup Race in 3D, it will have marked a broadcast first for the association. The "Coke Zero 400 in 3D" joint production by NASCAR Media Group (NMG) and Turner Sports will be offered by DirecTV, Comcast, and at TNT RaceBuddy on NASCAR.com.

"Our fans have been asking us about 3D for several months, so we're excited to deliver that to them for the first time ever in what will likely change how NASCAR is consumed moving forward," said NMG COO Jay Abraham.

Hosts of Showtime’s “Inside Nascar” (L to R) Brad Daugherty, Randy Pemberton, Chris Meyers, and Michael Waltrip. Scott Hunter/NASCAR Media Group This announcement marked the latest salvo in NMG's initiative to create and distribute content over all media—its own and that of third parties. The barely three year-old NMG describes itself as a media, marketing and entertainment company that creates and produces programming, manages NASCAR's media partnerships and forges relationships to integrate assets into mainstream entertainment.

To date, the organization's mainstream entertainment initiatives include TV, film, radio, home video, licensed consumer products (DVDs, games, deals with iTunes and Sprint) and premiums for the sports' sponsors, tracks, teams and fans (including video displays at the Hall of Fame).

Abraham classifies NMG more succinctly. "We're really at heart a technical company," he said, emphasizing its core goal of capitalizing on every inch of the entertainment pipeline. The enterprise has 185 full-time employees and has a separate company to hire staff to man the TV compounds at each racetrack event.

In January, its production staff moved into the brand new 90,000 square-foot facility at NASCAR Plaza Office Tower, literally a pedestrian bridge across from the NASCAR Hall of Fame, which opened May 25. Earlier reports pegged the new home at $45 million for construction and state-of-the-art equipment, a figure confirmed as "in the ballpark" by Abraham.

Already in place for the 3D initiative are the 3G infrastructure for delivering 3D in real time, two RED One cameras and Quantel's Pablo stereo3D broadcast editing solution. They've been used for NASCAR Sprint Cup races and an ad for the NASCAR Hologram program (a tag required on licensed merchandise to prevent counterfeiting), according to Jeff Lowe, NMG's managing director, Media & Broadcast Technology for the NASCAR Media Group.

Management sold the internally financed facility to its largest stakeholders, the France family, as an investment in the future of NASCAR to help grow the sport, according to Abraham.

"We are responsible as historians and archivists to insure, preserve and maintain that asset in a stable, safe and backed up manner," he said. "We needed to be more streamlined in our ability to capture, gather and archive our content to make it more usable."

Key to that goal was consolidating content into a central repository with a foolproof disaster recovery plan, and creating a flexible data management system to access it.

Abraham recalled "chasing partners for meld reels" in the not-too-distant past. In 2001, NMG began to consolidate content from tracks, the International Speedway Corp. and Speedway Motorsports Inc. The archive initiative began in earnest in 2003. During its 2005-2006 contract negotiations, NMG convinced its broadcasting partners that centralizing production resources could create cost efficiencies for all parties. Technical expertise will drive NMG toward the catbird seat at the 2014 negotiations.

NMG produces content for the SPEED Channel, Fox Sports Net, Showtime, ESPN and ESPN2, Versus, CMT, GAC, Discovery, BET and Comcast. The international feed has also moved to its hub.

"We would produce the international feed at the track every week, and then send it out via satellite," said Abraham. "By bringing the feeds in house and cutting it here in this facility, we've been able to save money by not having to transport bodies [and equipment] to the track." Turnaround production has been cut to about 14 hours vs. two to three days.

Further cutting costs was last year's decision to use Crawford Communications' turnkey Teleport services for all transmissions originating from the track, three studios and live stand-up locations at NASCAR Plaza and the Hall of Fame. Lowe expected to amortize the cost of the process in about 24 months, and noted it had cut transmission to customers in 114 countries much closer to real time.

And NMG is actively pursuing deals to leverage excess capacity to service third parties with studio time, satellite feeds, duplication, archiving, and production/transmission services. Clients as diverse as Warner Bros., Car Max and the University of South Carolina have already signed on.

"Fork allows us to ingest nearly 10 terabytes of new content daily, while adding valuable metadata," said Lowe. "We worked very closely with Building4Media to create a time code scanner that frame-accurately marks breaks from any HD or SD source."

"This product allows us to submit an XML [file] from Final Cut Pro, and automatically cuts the QuickTime file into pieces needed for an edit session," said Lowe, thus reducing the amount of time needed to restore media files for an edit session and saving disk space.

Internally, he said, NMG is writing its own archive tracking systems to blend toolsets from the various providers into one centralized database.

"This will allow any user in the company to track a media file from acquisition to archive—and any other stop it may need to make along the way," said Lowe.