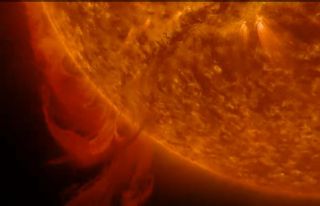 HELIOS: The effects of an eruption on the Sun two days ago are expected to bypass Earth, scientists say. A massive solar flare on Dec. 14 sent a plasma cloud into space, but not directly toward the blue planet, NASA said. The agency had cameras pointed at the Sun’s surface when the event occurred. Its Earth-orbiting Solar Dynamics Observatory had been monitoring an “unusually long filament” snaking out from the sun’s surface for several days. It finally exploded on Tuesday, according to SpaceWeather.

NASA said the plasma cloud missed Earth, but SpaceWeather said a “glancing blow” producing auroras in high latitudes was possible. A solar flare that occurred Aug. 1 of this year did not reach the Earth for four days.

Direct hits can wreak havoc with radio signals, knocking out TV and radio reception. They can also disable satellites, as was the case with Intelsat’s Galaxy 15. G-15 has been rogue since April, when a solar flare was thought to have knocked out its communications systems. (Doug Lung provided technical analysis in “Rogue Satellite Won’t Die.”)

It continues to collect and transmit data while drifting off course. Chris Forrest of Advanced Television reports that G-15 will go into a sort of sleep mode toward the end of this month when its solar panels turn away from the sun. He says Intelsat engineers will once again try to reboot the satellite when it does.