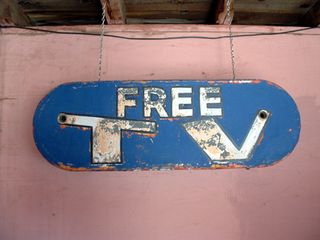 WASHINGTON: Around 12 percent of the nation’s full-power TV stations would be knocked off the air under the National Broadband Plan. This, according to an analysis from the National Association of Broadcasters, which today said regulators have “withheld” their own analysis of how reclaiming 40 percent of the broadcast TV spectrum would affect the industry.

“It is very difficult not to do tremendous damage to broadcasting,” said NAB chief Gordon Smith. “Modeling which we ought to have has been withheld from us,” as well as from lawmakers. “These facts ought to be known and considered.”

The NAB today presented its own findings in the event that the Federal Communications Commission redesignates the top 40 percent of the TV spectrum--Chs. 31-51--for broadband.

“Many stations will not have a channel to operate on after the repacking,” said Bruce Franca, the NAB’s vice president of science and technology who presented the analysis. He estimated that 210 full-power TV stations in 61 markets would have to go dark permanently. The analysis did not include the number of low-power, Class A and translators that likely would also be knocked off the air.

Repacking TV stations in a smaller swath of spectrum will be much more complicated than it was two years ago for the DTV transition, Franca said. Before the 2009 transition, 67, 6 MHz channels were available for television. The transition knocked it down to 49. The National Broadband Plan would knock it down to 29.

A second repacking would be further complicated by service disruptions. Prior to the June 2009 transition, TV stations installed digital gear while still transmitting analog signals. This time, they would have to go off the air temporarily to install new digital antennas. Franca noted that 60 percent of all TV stations share facilities, so even those not relocating would feel the impact. Cable and satellite operations also would have to be retuned.

The commission proffered the plan last year in compliance with a presidential directive to create nationwide wireless broadband. The initiative has gained momentum in recent months because the TV spectrum is expected to bring as much $30 billion at auction, and lawmakers need pay-fors in debt-ceiling legislation. Broadcast spectrum incentive auctions are one of those, Smith said. Despite the estimates floated by various interest groups, attaching a true dollar value to it is tricky.

The current strategy for reclaiming broadcast spectrum rests on holding incentive auctions for TV licensees who voluntarily relinquish their frequencies. Just how many will do so is a wild card. The total may not yield the FCC’s goal of 120 MHz, and there is no Plan B just yet. The hope is that enough stations give up their spectrum in exchange for a portion of auction proceeds, that the remainder can be squeezed into the 29 bottom channels of the band.

However, the commission hasn’t provided a model of that to lawmakers, and they need to know how their constituents might be affected, said Smith, a former Senator.

“Few things used to light up my phones in my senate office than when people’s televisions were messed with,” he said.

Modeling has been done for a pending Senate bill authorizing incentive auctions for 84 MHz. The Congressional Budget Office issued its cost estimate of that bill, S9.11, last week. The CBO said 84 MHz would bring $24.5 billion in receipts, but reduce spending by only $6.5 billion over nine years because of associated costs, including $1 billion for relocating affected broadcasters. The NAB put the number closer to $2.5 billion. Smith said, with all due respect to the CBO, its scores are often wrong in the long run because of changing circumstances. In this case, the unknown impact of the AT&T--T-Mobile merger, for example.

The NAB’s analysis was refuted by broadband plan proponents, including the wireless and consumer electronics lobby.

"Contrary to the scare tactics that NAB is presenting to consumers and policymakers, reallocating underutilized spectrum will not remove free over-the-air broadcast television,” CTIA-The Wireless Association said in a statement. “NAB’s study confirms that even under their analysis, spectrum can be moved voluntarily to its highest and best use, billions can be raised for the United States Treasury and free over-the-air broadcast services continue.”

Michael Petricone of the Consumer Electronics Association had this to say: “The NAB study sets up and knocks down a purely fictional straw man. The study presumes an unrealistic scenario in which every single existing TV station continues to operate over-the-air. However in the event of incentive spectrum auctions, it is highly likely numerous stations will capitalize on their spectrum assets by exiting the business or sharing resources.”

The NAB would like current legislation to include further protections as well. Smith laid-out a four-point plan testifying before Congress earlier this month that also included a request for only one incentive auction, full replication of coverage areas and no forced relocation into the low VHF channels, where DTV reception is notoriously lousy. Congress has until Aug. 2 to hammer out debt-ceiling bill to prevent the United States from going into default. Incentive auction legislation is expected to be included.
~ Deborah D. McAdams