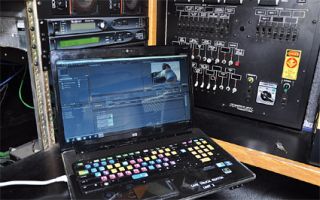 The NHL is deploying VidoVation’s 60-GHz wireless HD-SDI RF technology in the form of a goalie-cam to cover the action up close. "If I turn the clock back 30 years or so, back in that era the only way you could get live news out of an event back to the station was through the use of microwave," said Joe Snelson, Meredith Broadcasting Group Vice President of Engineering and chair of SBE's Frequency Coordination Committee. "Today, there are a number of different ways that you can get live video back to the studio on a last-minute notice," including classic microwave, 3G and 4G, and various Internet connections.

"I kind of look at covering news now as having a toolbox, and you pick the right tool for the job."

For those who use the term microwave as not so much a technical term for a point-to-point transmission link but as a generic term for getting video and other data back and forth from the field to the station, there is good news afoot according to Mike Payne, managing director at Vislink.

Payne points to a pair of promising trend curves. "You've got the infrastructure capacity starting to grow more quickly with time, and conversely the efficiency of the techniques we're using are also growing," said Payne. "So, the number of bits that you need for a given service are actually going down at the same time the capacity of the infrastructure is going up."

As a result, "we see a combination of the IP public infrastructure and unlicensed spectrum as becoming more of a factor." He said Vislink's roadmap has them building tools very much along the line of the toolbox Meredith's Snelson predicted. "We're looking to try to help facilitate that, come up with products that start to make that convergence, unlicensed and licensed spectrum together, along with public infrastructure 3G and 4G, and ultimately LTE, and WiMax in the rest of the world."

Vislink currently has its AMG Mobile Gateway system delivering, and Payne said the 2012 NAB will see a raft of new products from the U.K.-based wireless communications company.

Dave Walker, vice president of product development for Integrated Microwave Technologies (IMT) in Hackettstown, N.J. looks at the leaner news crews out on the street today and notes that, to use Snelson's "toolbox" metaphor, there's a need for a system to pick the right tool for signal transport, and to switch between tools as conditions change.

"The days of engineers in the trucks are gone, so what's needed is a simpler, one button selection that is less likely to get messed up," he said. "So you need a system that takes care of that in the background." IMT has built that capability into its Nucomm Messenger system. "As soon as you edit a file you drop it in a folder, and then the system takes care of it."

A Nucomm Messenger IP file transfer system integrated in a WHTM TV ENG vehicle transfers files from a laptop nonlinear editing system. Where a microwave link is already established, Messenger's ODI (Opportunistic Data Insertion) mode replaces null packets within the MPEG transport stream with IP packets from the video file needing to be transported. If the microwave path is interrupted, Messenger seamlessly begins sending the files back via 4G or other IP pathway available.

To deliver IP data back out to the field, Messenger can employ a variety of "tools" such as over-the-air 8-VSB, COFDM, cellular networks, or Wi-Fi 802.11 b/g. Messenger's proprietary algorithms enable it to select and seamlessly switch between the most efficient transmission paths.

Graham Bunney, president of Broadcast Microwave Services (BMS), said that while broadcasters, flush with their new Sprint Nextel digital microwave equipment, may be less ready customers for microwave equipment, there's a thriving market to be had in sports and other productions that need wireless video links.

"We've become more focused on the sports market," he said. "We've got some new camera back transmitters, very small and compact. They can be fitted to a small handheld camera, like the Canon prosumer-type camera." The NT5723HD EXTREME provides an output power of 200 mW, which Bunney noted is unique for such a small-sized transmitter.

Licensed spectrum is more difficult to come by for the independent sports productions than it is for broadcasters, which Bunney said is the reason the new transmitter is designed to utilize the 5.8GHz band. He also pointed out that the importance for sports productions having minimal delay—because video from the wireless cameras is intercut with wired cameras—dictates use of MPEG encoding at this point in time. "Latency of [MPEG-4] H.264 is around 200ms at the moment, but we're working on getting that down," he said.

VidOvation in Aliso Viejo, Calif., is another microwave vendor working with licensed spectrum, and has chosen to go to an even higher band, 60 GHz. Their customer, the National Hockey League (NHL) wanted an uncompressed 1.5 GB HD signal from its goal verification cameras to the arena ceiling in all 30 NHL venues.

"If you try to pipe a 1.5 Gbps signal through another application, like a 5.8 GB channel, or carrier, you just don't have enough bandwidth," said VidOvation President and CEO Jim Jachetta. "The carrier isn't fast enough to carry the whole payload. The league had tremendous problems with interference with a 5.8 GHz system, because a lot of video equipment uses 5.8 GB band, and that's becoming very crowded," he said. "The beauty of 60 is that it's very directional.

"You would have to point your transmitter and receiver within a 6 degree angle of another transmitter or receiver before you could even begin to interfere, because it's highly direct, it's really a beam that you're shooting. And it's a system that can go up to a kilometer, so it's a great technology."

The fact that it might be near to impossible to track a moving transmitter with such a narrow transmission beam will also limit the application for 60GHz systems, which in of itself will reduce crowding.