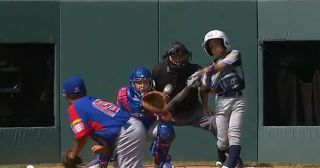 WILLIAMSPORT, PA.: The action of the Little League World Series is going live, mobile, social and 3D. The Series is set to begin tomorrow with sister nets ABC, ESPN and ESPN2 telecasting all 32 games between them. And 22 will be carried in 3D on ESPN’s stereoscopic network. The games run through Aug. 28. ESPN is taking the Series online, to smartphones, Facebook and Twitter.

ESPN, marking 23 consecutive years of coverage this year, will join ESPN2 to televise 27 games from Williamsport. All of those telecasts will be simulcast via ESPN3.com, and nearly all games will be available on ESPN Mobile TV. Those who receive their cable TV video subscription from an affiliated provider will be able to tune in live via the WatchESPN app on tablets and smartphones.

ABC, in its 49th year of covering the Series, will carry the International Championship and the U.S. Championship on Saturday, Aug. 27, at 12 p.m. and 3 p.m. ET, respectively. ABC will then present the Little League World Series Championship on Sunday, Aug. 28, at 3 p.m. Overall, ABC will broadcast five games from Williamsport.
~ Deborah D. McAdams