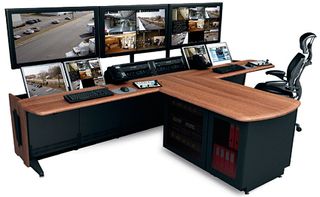 ABC-New York’s HD Master Control Room includes a front console from Forecast Consoles that employs a low profile equipment turret with rear extrusion for LDC Arm mounting. Monitors housed in a Forecast Consoles Sightline accommodate the mounting of LC D monitors. "The worlds of TV production and IP/IT are merging," observes Bill Haberman, President/CEO of Forecast Consoles in Hauppauge, NY. "This means that today's broadcast furniture must accommodate a wide range of computer technology, including PC workstations, keyboards and flat panel monitors. That's a big change from the analog days, when CRTs and large format switchers/mixers dictated how broadcast furniture was made."

At the same time, "there's a big difference between professional consoles and a PC work station," says Randy Smith, president of Winsted Corp. in Minneapolis. "Most editing systems look and feel like a PC, but in a broadcast environment these consoles are used for very long hours with tight deadlines. [To deal with this fact] Winsted takes into account the operator's workflow, wire management, ergonomics and durability."

Look at the major broadcast furniture manufacturers' websites, and you will see just how much IT is influencing their current product lines.

The company's goal is to create work spaces that are specific to each application, yet usable by a wide range of personnel. "No longer are we building customized workstations," Forecast Consoles' Haberman says. "In today's 24/7 production environment, 3-4 people may use the same station during a day. So the furniture has to have the ergonomic flexibility to accommodate this fact, because each operator is physically different in size and shape."

To keep up with television's transition into IT and environmental responsibility, Middle Atlantic has unveiled its new line of ViewPoint consoles. These modular units are based upon fully-welded Uni-Frame workstation bays to simplify installation and configuration. The ViewPoint line comes with wedges, bay extenders for rackmounting deeper equipment, turrets for smaller equipment, work surfaces tailored to each system, side panels, and monitor mounts.

Besides its flexibility, ViewPoint consoles are seismic certified to UBC, CBC, IBC, ASCE and NFPA requirements. They also meet BIFMA standards and are GREENGUARD certified; allowing them to be used to obtain LEED (Leadership in Energy & Environmental Design) credits.

"Equipment and software have freed the console from housing a great deal of equipment," says Pete Pedisich, TBC Consoles' Senior Designer. "In particular the front-to-back depth of the console is being reduced, and our IntelliTrac console is available in several depths to accommodate this. We are also seeing a continuation of the trend towards larger and wider monitors, which now determine the width of a typical console position more often than the traditional 'rack bay' width."

Winsted Corp. keeps updating its broadcast furniture to stay abreast of the latest customer demands. "The trend is larger and larger LCDs with the wider aspect ratio," Smith said. "We have an aluminum track system in the back of our Prestige console to allow the user to adjust for different size LCDs."

The company's line of Ascend broadcast furniture allows operators to choose between sitting or standing at the work area, simply by pushing a button to raise or lower the work surface. This flexibility reduces operator fatigue, by letting them move around during the work shift.

Today's broadcast production furniture is light years' away from the boxy steel cages and cabinets that housed the CRTs and dedicated switchers/mixers of yesteryear. Yet, at the same time, they provide a broadcast-centric design that conventional IT furniture doesn't provide. Buying a generic PC desk from Office Depot and then hoping it will work for TV broadcast just won't cut it.