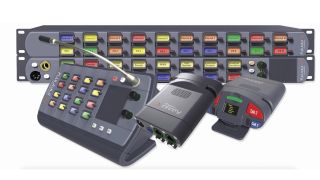 SEATTLE—Intercom makers design all sorts of technology to let them stretch their newscast communication systems to all sorts of far flung liveshot locations, but at least they could count on the anchor talent positions to be comfortably within reach in the studio.

And then one afternoon someone ran through the newsroom shouting “social distancing!” and by 5:00, the news, sports, weather and traffic anchors were coming to you from a variety of rooms in their homes, within six feet of no one.

Though there was some scrambling putting together the elements of a home studio, intercom vendors report that the systems they had installed largely were ready to go.

“While it would be fair to say we never imagined our current scenario,” said Bob Boster, Clear-Com president, “[our] Agent-IC is providing a simple yet highly effective solution to help production teams working-from-home all over the world stay connected.”

Agent-IC is designed to operate on mobile devices that run either IOS or Android, such as cell phones or tablets. “And since most people have that, they can use Agent-IC to connect back to either a matrix system of ours,” where they connect to one of Clear-Com’s IP cards, or through an appliance called LQ that can attach to somebody else’s intercom, whether it’s a matrix or otherwise.

“So we had that capability already, and a lot of people were using it,” Boster continued. “But until COVID-19, we just didn’t necessarily have that many situations where people had to all of a sudden put their entire staff out into home offices.”

Denis Castanet, director of product management for RTS reported much the same: “As a result of the current situation, remote production is part of the new normal for broadcasters everywhere.” The company’s VLink communication solution for RTS intercom matrix systems has become a go-to during the COVID-19 pandemic, with the software-based virtual intercom platform allowing broadcast professionals to work remotely.

VLink enables remote users to interface with their RTS intercom matrices over IP using a simple application, allowing a new degree of control and flexibility from anywhere in the world. “VLink is designed to make this process as seamless as possible,” Castanet added, “and, judging by the recent increase we’ve seen in software licenses, it’s becoming a key tool for organizations across the globe.”

Telos’ Infinity is the company’s best solution for communicating during at home broadcasts, according to Martin Dyster, vice president of business development for Telos’ TV Solutions Group.

“Telos Infinity is a pure IP intercom system that is built without a central matrix,” he said. “It operates using IP connectivity, AS67 connectivity, natively.

“This allows simple conversations from point A to point B, party lines and conferences, ISPs, group communications, all those kinds of things that you would expect,” Dyster continued. “The Telos Infinity natively allows that to happen within a local area network. The remote at-home anchor can have a belt pack or panel. The audio runs on the OPUS codec, which provides high quality audio, even over less than ideal Internet, including the anchor’s home WiFi.”

Getting the intercom to a news talent’s in-home anchor desk is easy, according to Rick Seegull, manager of systems consulting for Riedel.

“Let’s say something just happened five minutes ago, and the newscaster can’t get to the studio; they can call in and get an extension,” he said. “Basically it’s a phone extension, but it’s within the system, and then it can be routed, joined in, or brought in as a mixed minus, an IFB, however you want to do it.

We also have Connect IT, that can connect anywhere from two to eight panels, and basically you take their panel from the control room, a spare panel, and connect it to their home network,” he said. “That panel will show up just like it was at the office studio. So everything they had on the panel at the station, in the control room, they’ll have in their house.”

Gary Rosen, vice president of global sales for Pliant Technology in Auburn, Ala., said the company’s intercoms “are used on all sorts of “casting:” narrow cast, web cast, broadcast, SKYPE, whatever. These weren’t productions that used to use intercoms, because it was so expensive.”

Rosen predicts that even when the pandemic and its six feet of social distancing is over with, communicating won’t be quite the same.

“If I’m standing close to somebody, there’s been a tendency for me to walk over and whisper a piece of information to them,” he said. “Now, whispering from just a few inches away is probably not something that’s going to happen anymore. I’ll be whispering from 30 feet away.”