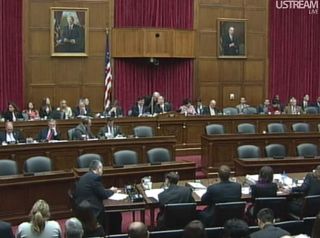 WASHINGTON: House Democrats today failed to wrestle a white-space set-aside into a GOP bill authorizing TV spectrum incentive auctions. Protection of white spaces was a sticking point for the minority on the House Commerce technology subcommittee, which passed the Jumpstarting Opportunity with Broadband Spectrum Act of 2011. White spaces comprise spectrum in the broadcast band not occupied by TV channels. Federal regulators and commercial players are still setting up the infrastructure to use white spaces for unlicensed devices.

“I’m actually a fan of unlicensed spectrum usage,” said Subcommittee Chairman Greg Walden (R-Ore.), who introduced the JOBS bill Tuesday. Walden said that if legislators were going to use auction proceeds to relocate broadcasters, they shouldn’t give spectrum to other users for free. He said the Democrat’s spectrum bill would reduce potential auction proceeds by $1 billion, and emphasized the GOP position that 675 MHz of spectrum under the 6 GHz band is now available for unlicensed use.

Democrats said large markets like New York would lose all white spaces after up to 20 TV channels are reallocated for broadband—the intent of the incentive auctions. The majority didn’t budge, and shot down the alternative spectrum bill proffered by Democrats. Eshoo and her colleague Rep. Henry Waxman (D-Calif.) introduced a spectrum bill of their own Tuesday just hours after the majority unveiled the JOBS Act and scheduled it for today’s markup and vote. The Eshoo-Waxman version was shot down 8-16, but they continued to press their points.

One contention was the funding level for relocating TV stations displaced in a channel repacking. The JOBS bill allocated $3 billion for the process, while Democrats contended $1 billion was sufficient. They were particularly put out since Walden picked a nit over white space protection reducing auction proceeds by $1 billion.

Walden emphasized that the $3 billion was a capped fund and not a “blank check.” He said the amount had to be sufficient to assure broadcasters their relocation costs would be covered because they are not required to relinquish spectrum for auction. Broadcasters now are being asked to voluntarily offer spectrum to be auctioned for wireless broadband licenses.

Democrats also parted ways with Republicans over governance of the proposed public safety wireless broadband network. The JOBS bill directs the allocation of a 20 MHz block of spectrum for a public safety network, to be created at the state level. Democrats fought for a national nonprofit to handle oversight. Waxman said the GOP bill “repeats mistakes of the past,” of so many disparate public safety entities failing develop interoperability. Rep. Cliff Stearns (R-Fla.) said a national nonprofit would bleed tax dollars and invoked the specter of “Amtrak.”

The minority also fought for language that assured the ability of small businesses to participate in the incentive auctions. Walden said the bill did not prevent the Federal Communications Commission from setting such public-interest requirements. Rep. Ed Markey (D-Mass.) countered that the language in the bill was so “unclear and vague… it would be litigated to kingdom come,” effectively knocking out all but super carriers like Verizon and AT&T.

One small victory for the Democrats was a bipartisan amendment from Reps. John Dingell (D-Mich.) and Brian Bilbray (R-Calif.) preventing FCC from holding spectrum auctions without conducting international coordination of signal repacking with Mexico and Canada.

After three-and-a-half hours of wrangling, the bill was passed to the full Commerce Committee on a vote of 17-6. The National Association of Broadcasters responded immediately:
“NAB strongly endorses spectrum provisions in the incentive auction bill passed out of the House telecommunications subcommittee today. This bill balances sound spectrum policy with protections against the potential considerable loss of local TV service by millions of Americans.

“We appreciate Chairman Walden's outstanding leadership in shepherding this legislation through the subcommittee. NAB also salutes Reps. Bilbray and Dingell for their amendment--passed with bipartisan unanimity--ensuring that U.S. TV stations along the Canadian and Mexican borders aren't repacked out of business.

“NAB’s position on TV spectrum auctions remains unchanged: We support them so long as they are truly voluntary, and so long as TV stations that choose to remain in business are held harmless.”
~ Deborah D. McAdams