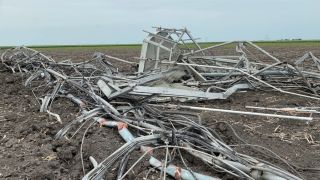 CORPUS CHRISTI, Texas—Strong winds caused the collapse of a TV tower near Robstown, Texas, this week.

KRIS-TV, a Scripps-owned NBC affiliate in Corpus Christi reported the incident to its viewers on Wednesday, causing OTA and satellite viewers to lose the signals for KRIS, The CW, KDF, Grit and Court TV for a few hours. There were no injuries.

There was also minimal damage to the KRIS 6 News building as well, the station said.

“Broadcast engineers at KRIS 6 News and its parent company, the E.W. Scripps Company assessed technical options and worked quickly to resume broadcast to our Corpus Christi audience through the KZTV tower, which Scripps also operates,” the station reported on its website.