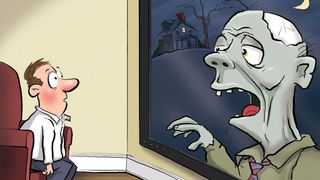 In late October, the Consumer Electronics Association (CEA) begins the drum beat about innovation, new technology and, of course, new products. The noise is all focused on the association’s upcoming Consumer Electronics Show in January. It’s often hard to discern real product technology from all the smoke and mirrors as vendors scramble for attention. Although the event is titled “Consumer,” broadcasters should often take heed as the last two broadcast-related innovations originated at that show — digital/HDTV and 3-D. One worked; the other, not so much.

This year’s convention ramp-up is symbolized by the association’s annual “Five Technology Trends to Watch” report. In the report, the CEA predicts five technologies that will soon affect consumers. This year’s report includes one that will affect Broadcast Engineering readers — super high-resolution video displays.

However, not so fast says Jon Peddie, president of Jon Peddie Research. Even for those early adopters, he says, “the tricky part” with 4K is that there needs to be content. “That’s going to be the barrier more than the price or the technology,” he says. Peddie also notes that has been the problem for “stereovision” or 3DTV, for which there remains “insufficient content to keep viewers happy.”

“Indeed, there is no 4K content available today,” Taylor agrees. But, “Blu-ray 4K material is not too far off. And, with innovation in the video compression arena, you’ll see 4K delivered over the Internet, through cable and even through over-the-air broadcast television.” The CEA predicts broadcasters will be using ATSC 3.0 in “in eight to 10 years.”

Chris Chinnock, president of Insight Media (a market research and consulting firm focused on emerging display technologies), says, “Most people are going to look at their TVs and say, ‘It looks really good and crisp to me. Why do I need 4X as many pixels?’ And, the answer is, from a visual acuity point of view, you probably don’t.”

Chinnock continues, saying, “Most people are not going to see a difference –– certainly not under a screen size of 50in viewed from a normal living room viewing distance.” It will be on home screens — 60in and larger — where the benefits of a 4K image will be apparent. And, according to Chinnock, “the trend is to bigger screens.”

As with many consumer products, the real driving force is not just technology improvements, but an industry looking for the next shiny object to wave in front of consumers and separate them from their hard-earned cash.

A 4K consumer study done last August showed only 26 percent of survey respondents said they were interested in 4K technology, while 49 percent were not interested and 25 percent were undecided.

Before we push back, recall that many engineers laughed when HDTV was first introduced. (It was too big and expensive; digital quality was sufficient.) Then, we had those HD camera displays locked on rotating Geisha dolls. That was early HD, and many engineers said no one would pay $10,000 for a TV set, even if the picture was sharper. Well, some viewers did, and, thanks to technology, a 40in HDTV today costs less than $300.

So too will be the path of 4K.