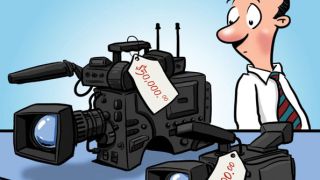 Speaking before the annual International Association of Broadcast Manufacturers conference, Grass Valley president and CEO Alain Andreoli examined the dilemma between the IT and broadcast communities. Andreoli said that because of their powerful positions, broadcast technologists have supported an infinity of proprietary standards, resulting in a matching number of “small” specialist vendors. The result, according to Andreoli, is that broadcast technologists often purchase best-of-breed products from small specialist vendors.

One result is a “hunter-gathers” versus “farmers” dichotomy, where the broadcast industry resembles the wild but needs to “change into a farm.” While the wild option provides a variety of choices and solutions, the farm approach results in a seamless and efficient contents management factory.

There is evidence that broadcasters are increasingly moving from the gold standard of “broadcast quality” to a “good enough” perspective.

Perhaps not surprising, given his background, Andreoli advocates a smaller group of vendors with interoperating solutions, much like that seen in the IT industry.

“Our space needs a few specialized but scaled ‘IBM-like’ leaders,” Andreoli said, “who can unify the contents lifecycle management and reduce costs.”

He is not alone in this viewpoint. Peter Angell, COO of media company IEC in Sports, expressed the view that “our business needs to embrace ‘good enough’; take
YouTube as an example.”

For comparison, Angell cited the World Cup production budget of $200 million and a tennis match, which might have a $5000 budget, “… but we use the same equipment,” he said. “Sport is using more equipment and more people, but content is not always high-value like World Cup. The content is the issue, not what it has been shot on.”

Angell also referred to today’s young viewers, saying, “the generation in five years’ time will not be interested in broadcast.”

Having been to my share of company press conferences and private meetings, I can confirm that Andreoli’s and Angell’s viewpoints are not unique among the heads of such companies. In fact, many CEOs would probably love to see everything (d)evolve into software.

Even so, there is evidence that broadcasters are increasingly moving from the gold standard of “broadcast quality” to Angell’s “good enough” perspective. Simultaneously, successful companies are moving equipment decisions from being CAPEX-centric to an OPEX focus. Why buy when you can rent? Such changes may neither be good nor bad; they are just today’s reality.

Simultaneously, these pressures mean human engineering skills must change. Being able to use a vectorscope may be useful, but that skill may not get you as far as being able to maintain an IP router. Knowing how to “chart” a camera may be less valuable to a company than being able to properly configure a Wi-Fi connection.

I grew up in an era where engineers proudly spoke of their “broadcast quality” standard. But, does that even apply when much of today’s consumer equipment can exceed the OTA performance of the local TV station? How can a chief engineer justify a $50,000 broadcast-quality ENG camera and lens, when 50 percent of news shots are done at night, in the dark, in front of city hall — and the news director wants to equip five crews? Will the viewer “see” any difference in the talking head with a less expensive solution?

Yes, there will always be events where we’ll want slo-mo and super low-light 4K performance. But, other programs may suffice with a $2500 Wi-Fi-enabled camera originating from the local coffee shop.

Will some viewers be able to tell the difference? Perhaps. Will it really matter? Maybe not.

Tell me what you think.