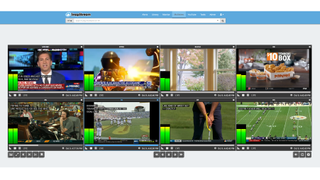 LONDON—Compliance monitoring and logging has always been a key part of the broadcast production and distribution process, albeit a niche, somewhat “background” one. Today its importance is growing in relation to the proliferation of TV channels and streaming services, with not only more programs to monitor but many more points along the chain to check as well.

The demands of both editorial/regulatory and technical compliance have put the onus on technology developers to produce systems that log and analyze more efficiently and comprehensively than before. Which explains why a relatively small, specialized but competitive market sector looks set to not only grow but also expand its reach along broadcast workflows and transmission paths.

Verizon bought Volicon in 2016 but decided to focus on “future solutions that better align with industry trends and market needs during the ongoing migration to IP and streaming video workflows,” when it made its announcement. To provide support for existing Observer customers, Verizon named SnapStream, a Houston-based provider of compliance monitoring software its official “Volicon transition partner.” After the announcement was made in April 2019, SnapStream reported that more than 100 Volicon users made the move to its support scheme. The second phase of the program came at the 2019 NAB Show New York with the launch of SnapStream Monitoring and Compliance, and there is now a full transition route, including settings, to SnapStream’s new “Moco” platform.

ALL IN THE FAMILY

As would be expected, the other compliance companies have been looking at the situation and developing their own migration paths for Observer users. Among these is Digital Nirvana, which is offering the option to switch to its MonitorIQ broadcast monitoring and compliance logging platform. An added incentive could be that Russell Wise, a cofounder of Volicon in 2004 who moved to Verizon following the acquisition, is now senior vice president of sales and marketing at Digital Nirvana.

Wise comments that the Volicon team—four of whom, including the user interface (UI) designer, moved with him to Digital Nirvana—”did a great job on the feature set” of Observer and that it was “a well-loved product.”

Wise acknowledges that users are now either replacing systems or considering their requirements. “Some networks are taking their time to make the decisions about replacing Volicon and a lot of the bigger broadcasters had the clout to have Verizon support it,” he said.

Wise adds that compliance is now moving from the main purpose of recording output to being able to scrutinize the logs to now using artificial intelligence and machine learning—which Digital Nirvana has been working with for seven years—and offering even more features, including producing transcripts.

Actus Digital has also produced a migration path for Volicon, making it possible to play existing recordings through the Actus UI. Gary Learner, executive vice president of business development for the company observes that compliance and monitoring “is not a stale market” but is “constantly adapting” to changes in broadcasting.

“New regulations and amendments to existing ones are coming in, the industry is not dormant,” he said. “The customers are looking at the vendors to see who is quickest to respond so you have to be on your toes. There are big changes because of OTT and streaming but also with the move from parallel IT and broadcast infrastructures to just one IT infrastructure. This means broadcasters are now looking for a single solution.”

Erik Otto, chief executive of Mediaproxy, also sees the growing trend for one system that covers all functions, increasingly in file form.

“The overall trend today is for software-based compliance monitoring and logging systems,” he said. “There still may be some applications that call for dedicated hardware but generally the entire broadcast market is moving towards software and virtualization of operations.”

This, Otto adds, is a major advantage as broadcast facilities move from SDI to IP, a shift that usually comes with an increase in channels due to traditional broadcasters adding VOD. “There is always the possibility of problems when switching from one distribution system to another,” he said. “Compliance monitoring and QoE [Quality of Experience] technologies will be crucial for both the smooth running of services and maintaining the quality of the viewing experience.”

The new breed of broadcast infrastructures is bringing production/post-production facilities closer to the playout and distribution chains, which in turn are now more connected to consumer platforms. This means the quality control stage, at one time carried out by a third-party facility or a specialist department within the TV station, is being more influenced by monitoring and logging.

“Compliance is becoming an extremely critical part of the QC process,” said Anupama Anantharaman, vice president of product management at Interra Systems. “Broadcasters and video service providers have quite a bit of responsibility to take care of both editorial compliance and technical quality and that means the monitoring companies have to come up with solutions that work in the cloud and are able to be scaled.”

Anantharaman predicts that in the next two to five years there will be more companies in this market sector, possibly offering “interesting solutions” that will “blur the lines between collecting compliance data and audience experience data.” Such a move could already be in progress, with the recent announcement of LWKS, a new company set up to take over the QScan analytical quality control (AQC) software and Lightworks nonlinear editing system from EditShare.

QScan has previously been used primarily for QC during the post-production process but there are now plans to take it further towards the compliance stage. “The transmission chain is something we can approach,” says Daniel Roqués, worldwide product manager for QScan. “The OTT providers are working with files and they need to make sure their streamed output is QCed.”

Brick Eksten, formerly with Digital Rapids and Imagine Communications, recently joined Qligent as chief executive. He views compliance as something “that has to be done,” Quality of Service (QoS) as “what you want to do” and QoE as “what you need to do.”

To ensure all of these processes work properly, measurements have to be taken at the granular level: “TV is a big data environment, with a large volume of content,” he said. “But there are not many people looking at the big data, other than on the analytics side. If ATSC 3.0 is going to succeed, it will have to behave as an internet service, because we are all consumers.”

Like the other compliance developers, Qligent is working on ML, which, Eksten says, “will take an ever increasing role in how we think about media delivery.” This, he concludes, ties in with big data: “It will give a greater degree of automation and allow the control room operators to concentrate more on what matters. As well as giving more operational freedom, it will also raise the accuracy of the automated systems.”

With ever greater technological potential and an increasingly vibrant marketplace, compliance monitoring certainly looks like the sector to watch.