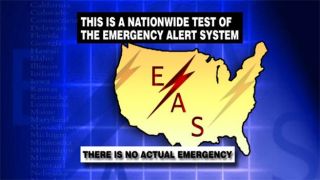 PHILADELPHIA: Comcast doesn’t except anything to go wrong during Wednesday’s nationwide test of the Emergency Alert System. Then again, just in case it does, the nation’s largest cable operator is telling it’s customers to be ready.

“Your Comcast programming will be temporarily interrupted. However, as soon as the test ends, you will be returned to your regularly scheduled programming,” the company said in an email to customers late last week. “While we do not anticipate an interruption in your service, in some rare cases, you may need to use your remote to channel up and then channel down or power down your box to fully restore programming after the test completes. Any DVR recordings that are in progress during this test will be interrupted, and in some cases, lost.”

Comcast, the nation’s largest cable TV provider with more than 22 million subscribers, will be participating in the first official test of a Presidential Emergency Action Notification over the nation’s Emergency Alert System. The test is scheduled for Wednesday, Nov. 9 at 2 p.m. Eastern Time. It will be triggered by the Federal Emergency Management Agency and the Federal Communications Commission. TV and radio stations, cable and satellite TV operators will carry the test to determine if the system works as designed.

Viewers will experience something similar to the required monthly EAS test broadcasters carry, but the related electronic equipment notification codes are different. The Nov. 9 test was originally to run for three minutes, but was scaled back to 30 seconds last week after concerns emerged that some folks might discern an actual emergency. Some cable operators cannot yet run a text crawl indicating the event is a test, creating the possibility that deaf and hard-of-hearing subscribers may misinterpret the alert as a real emergency.

The Comcast email indicates that the test may bring down some cable set-tops,:

“If you experience the Emergency Alert System message for more than five minutes, please do the following: Power-cycle your cable box by unplugging the power cord from the outlet. Wait thirty seconds and then plug it back in.”

“Please wait 20 minutes before choosing video on demand as this might result in other errors with your box.”

The nationwide EAS test is a result of an Executive Order signed by President George W. Bush in 2006 to update and integrate the country’s various warning systems. The new Integrated Public Alert and Warning System will eventually include Internet, cellphone and mobile computing devices--but not for the Nov. 9 test. Under FCC rules, only radio and TV broadcasters, cable operators, satellite TV and radio operators and wireline video providers such as AT&T’s U-Verse and Verizon’s FiOS, are required to participate.

Cellphone service providers are working on a system to deliver emergency alerts via text message. The Personal Localized Alerting Network is being designed to overcome congestion if need be. PLAN allows for geographic targeting of emergency alerts to cellphones. AT&T, Sprint, T-Mobile and Verizon have agreed to adopt PLAN technology by April of 2012.