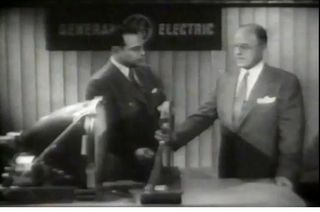 YOUTUBE: Not only did Don Herbert predict flat-panel TVs around 50 years ago, he did so in a way that a child could comprehend.

Herbert was otherwise known as the Peabody Award-winning Mr. Wizard, whose science shows aimed at children ran nearly 15 years in the ’50s and ’60s. Herbert also pitched for General Electric in the company’s eponymous “Theater” series, which was hosted by the late President Ronald Reagan. The flat-panel prediction was based on research at GE and summarized in a three-minute video clip.

Herbert begins by explaining how a mirror reflects nearly all of the light that hits it, and how scientists sought to rend more.

“Scientists at the General Electric Research Laboratory have discovered a way to amplify light directly on a surface,” he says. Herbert then turns an ultraviolet light onto a phosphorus screen. He then sends an electric current through the screen and increases the light tenfold.

“The current that went through the screen actually turns into light, making the picture brighter,” Herbert says. “A discovery like this could bring many changes to science and industry.”

Suits explains how the light-amplification process could lead to the elimination of cathode ray tube TVs.

“Our set designers think that future TV screens might look like this,” Suits says, gesturing to what looks presciently similar to today’s computer monitors. “It could be formed as a flat screen by means of light amplification. It’ll be some time before these projects become a reality.”

(Thanks to Robert Gonsett of CG Communicator for finding this one.) -- McAdams