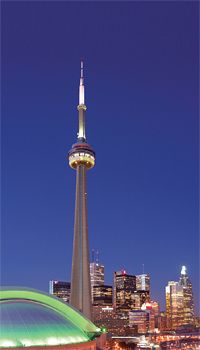 OTTAWA—The clock is ticking: On August 31, 2011, up to one million Canadians who rely on over the air broadcast television will lose their analog TV signals. In fact, up to 9.7 million Canadians could be affected by the shutdown of analog television when the Canadian DTV Transition takes place, because 29 percent of Canadian households have at least one TV using an OTA antenna, according to Ian Morrison, spokesperson for the Friends of Canadian Broadcasting, a Toronto-based nationwide voluntary organization tasked with defending and enhance the quality and quantity of Canadian programming.

The CN Tower in Toronto For the record, the DTV transition will affect Canada's 31 "mandatory markets," defined as the country's national, provincial and territorial capital cities; areas with a population over 300,000, and any smaller areas with more than one local OTA TV station. Smaller market broadcasters are being allowed to stay in analog mode below Channel 52 as long as they don't interfere with DTV signals.

U.S. ACTED 'TOO EARLY AND TOO BIG'

With less than six months to go, most Canadians remain unaware and uninformed about the impending DTV Transition. Only a handful of articles in the trade press have broken the story, but the Canadian media is otherwise not focused on the approaching analog TV shutdown, and hence, the public that relies on them.

As for the Canadian federal government? Currently the flagbearer of their minimal efforts is a government Website. Under the banner, "Canada's Transition to Digital Television (DTV)," the site simply says, "Following a decision from the Canadian Radio-television and Telecommunications Commission (CRTC), many Canadian local television stations will have stopped broadcasting in analog and will be broadcasting in digital by August 31, 2011. The vast majority of Canadians will not be affected because they receive their television signals by cable, by satellite or via the Internet. If you receive TV signals using a rooftop antenna or 'rabbit ears,' you may be affected."

The government website's advice for those who are affected is to buy a new digital TV set; subscribe to cable, Internet or satellite TV, or buy a digital set-top converter at their own expense.

This minimal messaging will soon be bolstered by a national PSA public awareness campaign, according to CRTC spokesperson Scott Hutton. Asked why PSAs are only now being launched less than six months before Canada's DTV transition, Hutton responds by saying the United States "went too early and too big" in its DTV transition and $1 billion set-top converter box coupon programs. Because an estimated 93 percent of Canadians are already on cable, Internet and satellite TV, and because Canada will not subsidize digital converters for the remaining 7 percent, the Canadian DTV transition is of a "more manageable size," he says.

Besides, converters only cost $30, Hutton notes. That's a number that the CRTC "has deemed to be affordable" for all Canadians.

PICKING UP THE TAB

Consumers are not the only ones not being helped with the DTV transition. Broadcasters have also been left to pick up the estimated $77 million conversion bill.

Meanwhile, the Canadian government stands to earn up to $4 billion by auctioning off vacated analog TV spectrum in the 700 MHz band. Yet Canadian Heritage Minister James Moore—the man legally responsible for Canada's broadcasting system—is on record as saying, "Our Government expects industry-led solutions that will ensure a smooth transition for consumers."

Hutton is similarly unsympathetic to broadcasters' calls for help, even though he says they were hurt by the recession. "There's no help coming from other areas," Hutton tells TV Technology. "You must get this done."

That may be okay for commercially funded broadcasters such as CTV and Shaw (formerly CanWest). But even the publicly funded, cash-strapped Canadian Broadcasting Corporation (CBC-TV) has not been given money to cover the expense of installing digital transmitters.

"The government made a deliberate decision not to fund the CBC for this transition—or fund anything else as part of the transition," says former CBC-TV executive Michael McEwen. He headed up CDTV, aka Canadian Digital Television. Launched by broadcasters to manage the DTV transition after the CRTC announced it in 2002, CDTV died four years later when some of its members quit. "On the other hand, both private and public broadcasters have had a decade to build out their digital networks and failed to do so," McEwen adds. "In my view, both the industry and government have a lot to answer for."

Whoever is to blame, the fact remains that time is running out for Canadian OTA analog television—and some people are likely to be unpleasantly surprised or worse when the DTV transition occurs. "It would be naive to think otherwise," says Wayne Stacey, one of Canada's most respected broadcast consultants. "Even the U.S. with its massive publicity campaign did not get the necessary info out to all OTA viewers on time."